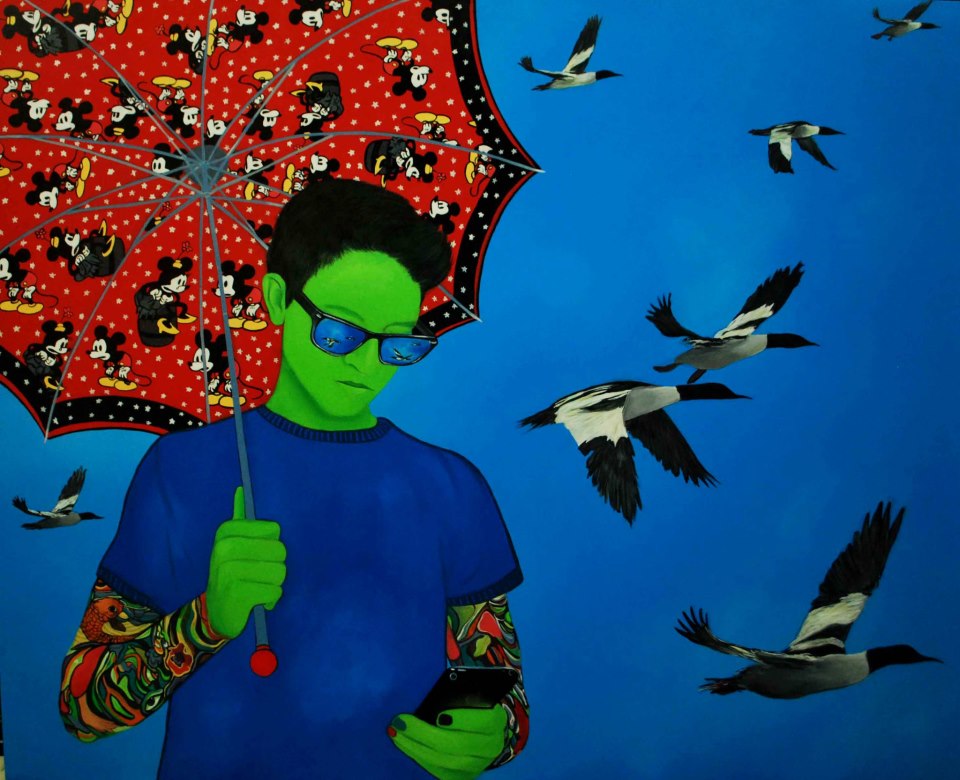 One Law for All’s 4th Passion for Freedom Art Festival opened on 3 November with a private viewing at Unit24 Gallery. Hundreds attended the viewing.

The festival, which is addressing the issue of freedom, is showcasing the work of over 40 artists from 20 countries worldwide (including censored works shown in London for the very first time) under the direction of Agnieszka Kolek, KM Curator and Marianna Fox, Assistant Curator.

Winners of the 2012 Freedom Awards are as follows:

The winning pieces were selected by judges Francisco Laranjo (Artist and Head of School of Arts at Porto University) and Nick Cohen (Writer and Columnist).

The Public Award went to Maria Strzelecka for “Mother Anarchy”:

A Special Freedom Award was given to Robb Leech for “My Brother the Islamist”:

One Law for All Spokesperson, Maryam Namazie, made the following speech at the private viewing:

Under totalitarianism and dictatorship, one eats “fear for breakfast, fear for lunch and for dinner, fear” says Uruguayan writer Eduardo Galeano.

Fear is palpable when one lives under an Islamic inquisition, even if it’s not experienced directly.

Even here in Europe – Islamism’s Sharia laws and fatwas of censorship and death for everything from blasphemy, heresy, and apostasy become secular ones – where the artist or dissenter is not routinely imprisoned or killed (even if the threat is always there) but proclaimed ‘guilty’ of offence, disrespect, intolerance, and Islamophobia, thereby making censorship and self-censorship ‘justifiable’.

Where it rules, Islamism forbids you to dissent; here, it convinces you that dissent is impossible.

Yet fear is only part of the story; it is what we do despite the fear that counts.

In the late 1980s, whilst working in Sudan, I and a Burmese colleague whose name I cannot recall initiated an underground human rights organisation opposed to the Islamic regime there. When things got tricky, he said the fear was secondary. Taking action – even when one is afraid – that is the sign of true courage.

Though I do often wonder who is really afraid of whom?

Islamists are even afraid of 15 year old Malala who wants the right to go to school.

It is they who are afraid of the truth. And of us.

One Law for All – and its Passion for Freedom Art Festival – speaks truth to power and demands change, despite the fear. But it also aims to honour our artists and our dissenters.

No society or community is homogeneous. Dissent and great art is alive even in the furthest and darkest corners of the globe. As is immense courage.

As Salman Rushdie says: “Great art, or, let’s just say, more modestly, original art is never created in the safe middle ground, but always at the edge. Originality is dangerous. It challenges, questions, overturns assumptions, unsettles moral codes, disrespects sacred cows or other such entities. It can be shocking, or ugly, or, to use the catch-all term so beloved of the tabloid press, controversial. And if we believe in liberty, if we want the air we breathe to remain plentiful and breathable, this is the art whose right to exist we must not only defend, but celebrate. Art is not entertainment. At its very best, it’s a revolution.”

One of the artists celebrated at the festival, Ai WeiWei says: “If we don’t push”, nothing changes. Clearly, change it must.

You can get more information on the 2012 festival here and here.

Information on previous festivals can be found below: