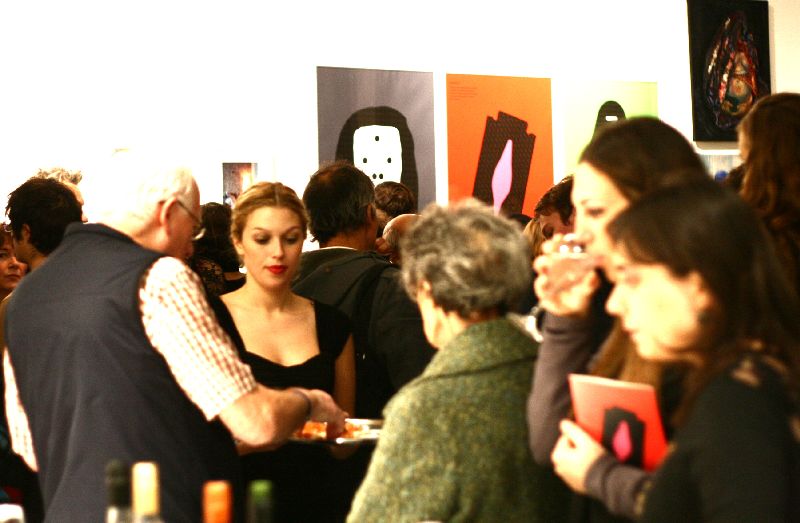 There are regimes that are afraid of artists but artists are not afraid of regimes.

18 International Artists took part in the ‘Passion for Freedom’ competition organised by One Law for All.  The group show presents artists shortlisted in the First Stage of the competition.

The winners of EQ Award which stands for Equality were announced at the 20 November private viewing at UNIT24 Gallery located next to TATE Modern.

The Gallery was packed with guests.

During the ‘Little Bride’ preview screening some of the viewers had to stand outside and watch it through the gallery’s high ceiling windows.

The show is of the highest standard.

One of the judges, Terry Sanderson, praised the high quality of the works presented.

There was press present not only from the UK but from all over Europe.

Basia Leszczynska, one of the shortlisted artists says: ‘The theme posed a huge challenge for me. Sharia courts in Britain, how to approach it? I kept asking myself? I did not want to present it explicitly.
Painting is a different medium to film making, reportage. At the same time the message has to be clear, it has to shake people’s minds. It has to stay with them for longer and make them think. Using the shock tactic does not always work in art, especially when we are talking about abuse of justice and brutal treatment of another human being. I wanted to avoid drastic images as there are too many of them around us.’

The time and effort put into organising the event was well worth it given the reception the exhxibition received.

The gallery was buzzing with conversations and excitement. The problems and issues avoided by many were openly discussed. We succeeded in bringing the subject into the open.

‘There are regimes that are afraid of art, but artists are not afraid of regimes’, with these words Agnieszka Kolek, the artist and curator, opened an envelope with the EQ Award winners.

1. Anna Sundt for ‘Cover up’ series

2. Roberta Coni for ‘Erasing her’

Maryam Namazie, One Law for All’s Spokesperson, gave a powerful speech stressing that in Britain there is silence over Sharia courts instead of condemnation. She said: ‘Sharia courts are not ‘just’ limited to civil matters. Just because they are denying women’s rights in the family rather than stoning women in city squares, one can’t say there isn’t a serious problem… We live in times that oblige us to stand up and be counted for!’

She stressed that the exhibited art is not only of the highest quality but is also a voice in defence of women’s rights.

An overcrowded gallery is not a common sight even in London, the capital of art!

John, a student at St. Martin’s College of Art, and one of the visitors says: ‘The show is amazing. I am impressed with the artists’ maturity and approach to the subject matter. I wasn’t aware of Sharia courts in Britain until now. It is really disturbing.’

‘I love Maja Wolna’s work. They are ascetic in their design but go straight to the point.’

‘And it shocks me when they tell me about religious laws.  How come women are still treated like this in the 21 century? And this law is applied in Britain? I am appalled.’

‘The show is amazing, interesting people, great food and wine. I will definitely follow the subject.’

Maryam Namazie’s speech at the event

You can submit your work to the preliminary stage of the competition at: