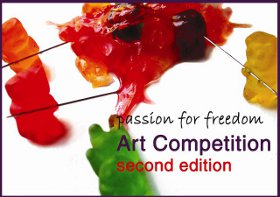 Passion for Freedom art Exhibition to be held in November 2010

Passion for Freedom art Exhibition to be held in November 2010

One Law for All is holding an art exhibition in London during 20-27 November 2010 in which a group of international artists address the controversial subject of religion and human rights. The exhibition includes pieces on the veil, female genital mutilation, child ‘marriage’ and women’s oppression.

A panel of judges author Polly Toynbee, singer Deeyah and secularist Terry Sanderson will select their favourite pieces for special mention at the private viewing.

The body of work varies in approach to the subject and mediums used. The show’s highlights are:

Maja Wolna, an award winning graphic designer who is presenting three works from the series ‘Behind the Veil’ which won the Gold Medal in the Ideological Poster category at the 22nd Poster Biennale 2010 in Warsaw, Poland. In the striking simplicity of her designs she manages to encapsulate the difficulties that women face living under Islamic rule.

Fiona Dent’s paintings confront us with the cruelty of female genital mutilation. In Britain alone, more than 21,000 girls a year are at risk of FGM.

Leszek Dobrucki’s film ‘Little Bride’ nominated at Cannes Film Festival tells a story of a Turkish girl sent to Germany and forced to marry at the age of 13.

To RSVP for opening night, or for more information, contact onelawforall@gmail.com.