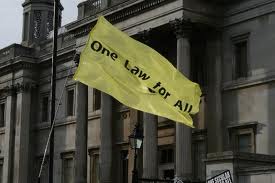 2012 Summary of One Law for All Activities

One Law for All: A summary of activities in 2012

In June 2011 the cross-bench Peer Baroness Caroline Cox introduced a Private Members’ Bill to the House of Lords that aims to restrict the powers of sharia tribunals and councils in the UK. Baroness Cox has said she was inspired to do so in part by the work of One Law for All. The Bill aims to subject arbitration and mediation tribunals to equality laws and will prevent sharia (or other religious bodies) from treating a woman’s testimony as worth less than a man’s. The Bill will also create a criminal offence and make it illegal for arbitration bodies to pretend they have greater jurisdiction than they do – in other words, preventing them from misinforming people that they must obey their rulings. It will also place a duty on public bodies in the UK to inform women of their rights under English law. You can read the bill here.

‘Equal and Free?’, a book of evidence compiled in support of the Bill, can be found here. The Bill has now passed two readings in the House of Lords. We will support the progress of the Bill through Parliament and will keep you up to date.

A petition to support the Bill can be found here.

It came as no surprise to One Law for All to learn that young girls, some as young as five years old, are being “married” under sharia law in the UK. Earlier this year, a Sunday Times reporter posed as a father and approached a mosque in Peterborough asking that his twelve year old daughter be married there. The imam agreed to carry out the marriage provided the father keep it a secret from the authorities. Imam Abdul Haque, a retired imam of a mosque in Shoreditch, agreed to officiate and advised the undercover reporter to “Tell people it’s an engagement but it will be a marriage. In Islam, once the girl reaches puberty parents have the right. Nobody should know about this. If she talks in school, social workers will take her. You and I will be in trouble.”

In response to pressure against atheist student societies and threats to a One Law for All event at Queen Mary College, University of London One Law for All organised a ‘Day of Action for Freedom of Expression’ including a rally outside the Houses of Parliament in February; speakers included Richard Dawkins, Jim Fitzpatrick, Caroline Cox, Pragna Patel and A C Grayling. You can see videos of the event here.

Further infringements on free speech this year are detailed on One Law for All’s website.

DV8 Physical Theatre’s piece on free expression highlighted the One Law for All campaign and the work of Maryam Namazie.

2012 marked the fourth year of our Passion for Freedom art competition and festival, which was a huge success. We received a record number of entries from artists from all over the world, and censored works were shown at our festival in November for the first time. A private viewing held at Unit 24 Gallery in south London had the highest attendance yet and artworks were judged by Francisco Loranjo and Nick Cohen. The event was attended by Robb Leech whose documentary ‘My Brother the Islamist’ was given a special freedom award.

Other Events and Activities

In July, Maryam Namazie met with the now former chair of the Equality and Human Rights Commission Trevor Philips. We also protested against the International Olympic Committee’s failure to implement its own obligations to adhere to the equality principles contained within the Olympic Charter. Our concerns included the banning of female athletes by some nations and the inclusion of veiled women from others. Further details on this can be found here . They also spoke at several events in the UK and abroad to highlight the discrimination, homophobia and misogyny inherent in sharia law, and have successfully built support for our campaign. Details of the year’s engagements can be found here.