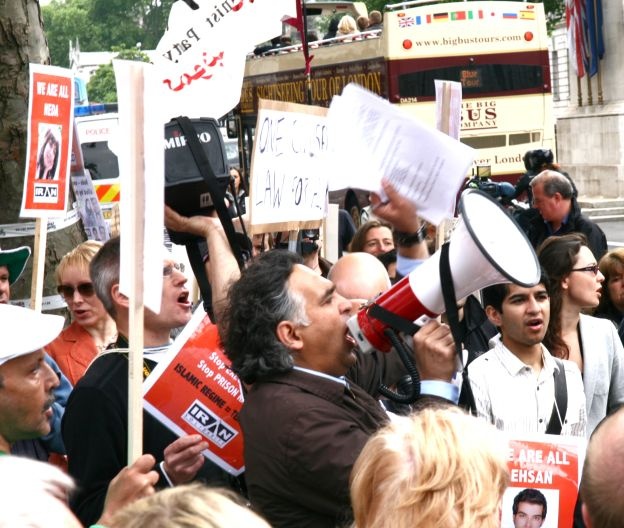 Several hundred people joined One Law for All on 20 June at Downing Street to show their opposition to Sharia and religious-based laws in Britain and elsewhere and to demand universal rights and secularism.

A new report “Sharia Law in Britain: A Threat to One Law for All and Equal Rights” was published on the day to coincide with the rally. Human rights activist Gita Sahgal said of the report: “I think it is highly significant that in Britain there has been silence where there should have been condemnation. There is active support for ‘Sharia laws’ precisely because it is limited to denying women rights in the family. No hands are being cut off, so there can’t be a problem. Unfortunately for us, senior law officers will find that human rights expert bodies often have a similar attitude. They have done little research on the impact of family laws and the denial of justice caused by parallel systems of justice. That is why the findings of this report are so important. It is such dedicated work that changes the thinking of the experts.”

She went on to say: “This campaign stands at the heart of a debate over the future of Britain. It also stands at the heart of global attempts to destroy the most basic rights, to invade liberty and to crush equality and to do this in the name of upholding and promoting human rights. We stand here today facing down forces of racism and fundamentalism as we struggle for secularism.”

The pro-Sharia Al-Muhajiroun organised a counter-demonstration to the One Law for All rally. One of their members said: “We find many of these people who call for human rights and one law. They come and they say that they want equality. But what equality do you get when one man legislates over another?” In response, One Law for All Spokesperson, Maryam Namazie, said: “The fight against Sharia law is a fight against Islamism not Muslims, immigrants and people living under Sharia here or elsewhere. So it is very apt for the Islamists to hold a counter-demonstration against our rally. This is where the real battleground lies. With a few members of the far Right English Defence League also there to showcase their bigotry, it became abundantly clear to everyone why our Campaign is fast becoming the banner carrier for universal rights, equality, and one secular law for all in this country and beyond.”

MC Fariborz Pooya of the Iranian Secular Society said: “The One Law for All Campaign has brought to centre stage an important debate about the kind of society we want to live in whilst defending the rights of everyone irrespective of religion, race, nationality…; this Campaign is truly the voice of the voiceless.”

Women’s rights campaigner Yasmin Rehman said: “We Muslims have been a part of the UK for many, many years but the generations before me did not feel the need for or call for segregation in the way that is being demanded now. At the beginning of my career as a women’s rights advocate there was no need to apply for a certificate of Khula in divorce cases. Muslim women are now being told that divorces under the English legal system are not valued or recognised without a certificate of Khula – and should they remarry without this they will be committing Zina – a ‘crime’ punishable by death in many Muslim countries. This is not a view shared by all Islamic scholars but a view that is being pushed through the Islamic councils and tribunals across the UK.”

Sue Robson of the Gay And Lesbian Humanist Association said: “This is a human rights issue. Here in the UK, it’s an egalitarian issue; it’s a feminist issue. Elsewhere in our world, the issue is life – and death.”

Gerard Phillips of the National Secular Society said that Sharia Law was “nothing less than an attack on human rights and on equality.” He went on to say: “It undermines our democracy. It must be opposed.”

The rally also heard from others including Naomi Phillips of the British Humanist Association, poets from the Anti-Injustice Movement and singer Adam Barnett.

Protestors then joined a march organised by Iran Solidarity to the embassy of the Islamic regime of Iran. Patty Debonitas of Iran Solidarity UK said: “By coming today you are showing your solidarity with the people here who are victimised under Sharia law and people in Iran who are being victimised under the state power of Sharia.” The rally was held on 20 June to mark the killing of Neda Agha-Soltan at a protest in Tehran last year and link the fight against Sharia here with that in Iran and elsewhere.

On the day, Maryam Namazie was interviewed on BBC 1 TV’s Breakfast Programme, and some other media outlets. They will be posted on the media coverage section of the website.

1. The new One Law for All report “Sharia Law in Britain: A Threat to One Law for All and Equal Rights” can be downloaded free of charge or a paperback copy purchased from One Law for All for £5.00 plus £2.00 Shipping and Handling. To purchase the book or donate to the work of One Law for All, please either send a cheque to our address below or pay via Paypal. One Law for All wants to send the report to MPs, the Archbishop of Canterbury and others. It would be very helpful if you could buy extra copies for us to send on to others free of charge.

2. Full speeches of speakers will be available on the website soon as will video footage of the day. Photos of the day are below.

3. The One Law for All Campaign was launched on 10 December 2008, International Human Rights Day, to call on the UK Government to recognise that Sharia and religious courts are arbitrary and discriminatory against women and children in particular and that citizenship and human rights are non-negotiable.