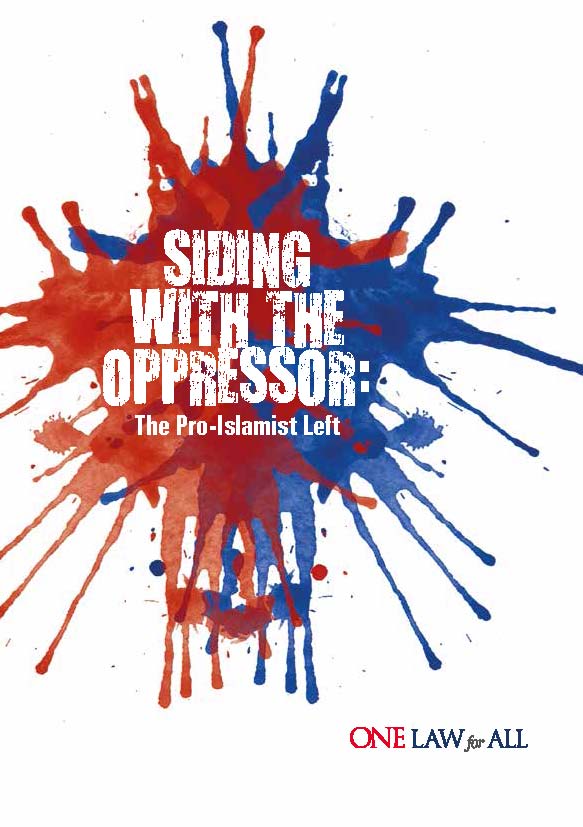 Siding with the Oppressor: The Pro-Islamist Left

A new report by One Law for All entitled “Siding with the Oppressor: The Pro-Islamist Left” exposes Stop the War Coalition, Respect Party, Unite Against Fascism and individuals such as Ken Livingstone and George Galloway and their agenda and methods.

This section of the Left uses accusations of racism and Islamophobia and a conflation of Muslim with Islamist in order to defend Islamism and Islam rather than out of any real concern for prejudice against Muslims or their rights, particularly since Muslims or those labelled as such are the first victims of Islamism and on the frontlines of resisting it.

The report has been written as a companion volume to “Enemies not Allies: The Far-Right”. Like the far-Right which ‘despises’ multiculturalism yet benefits from its idea of difference to scapegoat the ‘other’ and promote its own form of white identity politics, the pro-Islamist Left also uses multiculturalism to side with the oppressor by viewing the ‘Muslim community’ and ‘Muslim world’ as homogeneous entities thereby ignoring and silencing dissenters.

This politics of betrayal sides with the Islamic far-Right and the oppressor. Challenging this perspective is especially important given its wide acceptance as ‘progressive’ in mainstream society.

Any principled point of view must oppose all forms of fascism, including Islamic fascism, and instead side with the countless people, including Muslims, who are fighting and challenging Islamism here in Europe as well as the Middle East, North Africa and the world.

The below is Maryam Namazie’s postscript to One Law for All’s new publication Siding with the Oppressor: The Pro-Islamist Left. It is a companion volume to Enemies not Allies: The Far-Right. You can read full report here: SidingWithOpressor_Web.

It’s a betrayal of the dissenters and victims of Islamism but also of the very principles that the Left has historically defended (from social justice, egalitarianism, secularism, universalism, and human liberation, including from religion).

This Left uses multiculturalism, charges of racism and Islamophobia, and anti-imperialism, amongst others to defend the far-Right political Islamic movement.

The Pro-Islamist Left relies on multiculturalism (not as a positive lived experience but as a social policy and political point of view) to deny the existence of dissent by pigeonholing innumerable individuals with innumerable characteristics into one imagined homogeneous grouping: ‘the Muslim community’ or ‘the Muslim world’. And since it is those in power that determine the dominant culture, this point of view sees Islamist values and sensibilities as that of ‘authentic Muslims’.

In fact, ‘Muslims’ or those labelled as such include secularists, ex-Muslims, atheists, free thinkers, women’s rights activists, LGBT campaigners and socialists.

Conflating Islamism with Muslim is a narrative peddled by Islamists in an attempt to feign representation.

Contrary to how it’s viewed, regressive Islamists are given authority as ‘community leaders’ not because they actually represent the ‘Muslim Community’ but because of their access to the state, political power and their links with the political Islamic movement. Multiculturalism is a cheap way for the state to outsource social control.

Ironically, like the far-Right which ‘despises’ multiculturalism yet benefits from its idea of difference to scapegoat the ‘other’ and promote its own form of white identity politics, the post-modernist Left also uses multiculturalism to defend cultural and moral relativism and side with the oppressor.

To accept the Islamist narrative that Muslim equates Islamist is to hand over countless individuals to the political Islamic movement and to ignore the dissent, political, social and civil struggles and class politics.

This conflation means that those who challenge Islamism are accused of cultural imperialism and orientalism because the pro-Islamist Left has bought into the culturally-relativist notion that societies in the Middle East and North Africa (and the ‘Muslim community’ in the west) are ‘Islamic’ and ‘conservative’. Whilst those in power determine the dominant culture, there is no one homogeneous culture anywhere. Those who consider opposition to the veil or Sharia law as ‘foreign’ and ‘culturally inappropriate’ are only considering Islamism’s sensibilities and values, not that of the many who resist.

Only those who see their rights and lives as separate and different from those deemed ‘other’ and who have bought into (or are selling) Islamism’s narrative can see solidarity and the demand for equality in this warped way.

In fact, this politics doesn’t merely ignore dissent, in many ways it forbids it. The likes of StWC, Socialist Workers Party, Unite against Fascism, Islamophobia Watch, and Respect Party or Ken Livingstone and George Galloway are there as prefects to silence dissenters and defend Islamism as a defence of ‘Muslims’. There are many examples to show that they equate Muslim with Islamist.

In responding to those opposing its alliance with the Muslim Association of Britain (which is understood to be a branch of the Muslim Brotherhood), the StWC’s leadership Andrew Murray and Lindsey German have written:

Anyone remotely acquainted with the British trade union movement will be aware that neither sexism nor homophobia are uncommon in its ranks. […] woman can be subjected to more crude sexist behaviour than they might be likely to encounter within the Muslim Association of Britain. No one would suggest that an anti-war movement should have no truck with trade unionism until its ranks are 100 percent cleansed of such behaviour. Yet this is good enough as a stick to beat Muslims. Such attitudes indicate a form of racism, a desire to hold their organisations at arm’s length for the flaws which are, in some measure, tolerable in ours.

The comparison is absurd. The difference of course is that the ethos of the trade union is not anti-woman, its ethos does not say that apostates should be killed or as the head of the MAB said recently at a debate with One Law for All that women should be stoned to death. StWC’s alliance with the MAB is akin to aligning with the EDL and then saying that racism exists in the ranks of the trade unions too so why single out the English!?

This pro-Islamist Left deems any criticism of Islam or Islamism as racism or Islamophobia. However, criticising a religion, ideology or political movement – far-Right or otherwise – has nothing to do with racism. In fact, Islamophobia is a political term used to scaremonger people into silence.

In some ways, these bogus accusations serve Islamism in the same way that Sharia law serves them where they are in power. It helps to threaten, intimidate and silence criticism and dissent. Charges of offence and Islamophobia are the equivalent of ‘secular’ fatwas. It is a warning by the powers that be of what is acceptable and what is not; of what is sacred and cannot and must not be challenged.

This is of course not to ignore that racism exists. Of course it does. But racism cannot be stopped by silencing much needed criticism of Islam and Islamism. Also as campaigner Rahila Gupta says: ‘Recent anti-racist alliances… reveal the capitulation of the left to the fascists within while organising against the fascists without. We should be sophisticated enough by now to construct a politics that is simultaneously anti-racist and anti-fundamentalist so that vulnerable groups like women, lesbians and gays and religious minorities do not get hung out to dry. As feminists we have been abandoned by those who should have been supporting our right to make ‘legitimate criticism’. They feel now, during the War on Terror, is not the right time. In a racist society, it is never the right time. When we expose the underbelly of our communities we are told that we are providing ammunition for racists. For us it isn’t a choice. We can’t hide one evil to fight another.’

Anti-imperialism and force of resistance

Fundamentally, this Left’s support of Islamism comes down to its affinity with Islamism, which it sees as a force of resistance against imperialism. If racism was its real concern, it wouldn’t support the blatantly racist notion of different and lesser standards and rights for those deemed ‘different’.

This Left is part of an anti-colonial movement whose perspectives coincide with that of the ruling classes in the so-called Third World. It is on the side of the ‘colonies’ no matter what goes on there. And their understanding of the ‘colonies’ is Eurocentric, patronising and even racist. To them the people in these countries (and the ‘Muslim minority in the West’) are one and the same with the Islamists they are struggling against. This is why StWC manhandles and expels anti-Iranian regime activists from its demonstrations and rejects resolutions that simultaneously opposes a war on Iran and the regime’s attacks on the working class and population at large. It sees Islamism as a force for resistance whilst it is nothing more than a regressive force for repression. But an enemy’s enemy is not necessarily an ally.

Fundamentalist terror is by no means a tool of the poor against the rich, of the Third World against the West, of people against capitalism. It is not a legitimate response that can be supported by the progressive forces of the world. Its main target is the internal democratic opposition to their theocratic project and to their project of controlling all aspects of society in the name of religion, including education, the legal system, youth services, etc. When fundamentalists come to power, they silence the people, they physically eliminate dissidents, writers, journalists, poets, musicians, painters – like fascists do. Like fascists, they physically eliminate the ‘untermensch’ – the subhumans –, among them ‘inferior races’, gays, mentally or physically disabled people. And they lock women ‘in their place’, which as we know from experience ends up being a straight jacket…

What’s most ironic is that Islamism is a force that came into existence as a far-Right, anti-Left movement, supported by Western powers. It’s only after 9/11 that their relationship has changed and only to some extent. It’s still a close ally in helping to manage revolutions and rebellions in the Middle East and North Africa.

This politics of betrayal supports a far-Right movement that has slaughtered an entire generation in a place like Iran, that just recently assassinated socialist leader Chokri Belaid in Tunisia, and that shot 15 year old Malala Yousefzai in Pakistan for wanting education for girls…

Clearly, the Pro-Islamist Left’s politics of betrayal is just as inhuman as that of the far-Right. It’s particularly dangerous given that unlike the far-Right it has managed to gain portrayal in mainstream discourse as ‘progressive politics’.

Any principled position must oppose the far-Right of all varieties but also this pro-Islamist Left and rather side with universalism, equality for all, secularism as well as citizens and human beings, irrespective of beliefs.