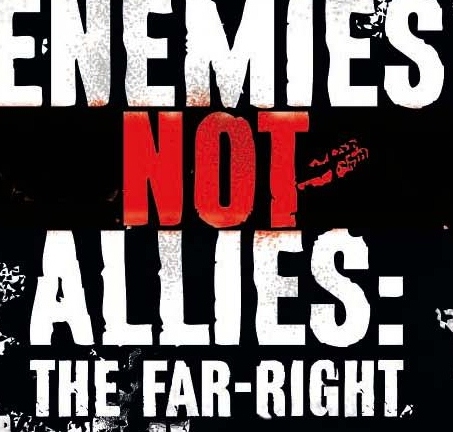 Response to Robert Spencer on Enemies Not Allies: The far-Right

Adam Barnett co-write One Law for All’s Enemies Not Allies: The Far:Right report. Here he responds to Robert Spencer’s statement on the report.

Following the publication of ‘Enemies Not Allies: The Far-Right’, our new report which investigates his and similar organisations, Stop Islamization of America director Robert Spencer has invited One Law for All to ‘substantiate [our] charges, or withdraw them and issue a public apology.’ One could simply recommend that Mr. Spencer read our report. Indeed, in his ‘rebuttal’, he writes as if he has answered all of these charges before. It’s therefore strange that he felt the need to reply to them at ‘11:53pm’ on a Sunday night, and to attempt to smear his critics as ‘racist anti-Semites’ and ‘supporters of Jihad’. One could be forgiven for thinking that Mr. Spencer hoped to prevent people from reading the report for themselves.

In any event, I’m happy to list our main charges against his group and refer interested readers to the relevant citations in our report:

– Stop Islamisation of Europe is the ‘expansion’ of a Danish anti-Muslim party, Stop Islamiseringen af Danmark (SIAD), which was itself the result of a split within a xenophobic lobby group. (p.36-37) It calls for a boycott of all ‘Islamic countries’, for the Qur’an to be banned, for the mass deportation of immigrants from Europe, and protests against the building of Mosques. (p.37, 44-46) SIOE’s leadership consider all Muslims to be congenital liars who have a ‘culture of deceit’, and never tire of announcing that they ‘do not believe in moderate Muslims’. (p.40-41, and here)

– SIOE’s leaders have collaborated with and defended Julius Borgesen, former spokesperson for the right-wing extremist group Danske Front, which has ‘co-operated’ with Blood & Honour and Combat 18. Borgessen has reportedly participated in a march to celebrate Rudolf Hess, and was imprisoned in 2007 for calling for an arson attack against a Danish minister. SIOE insist that Borgesen is ‘in no way Nazi [or a racist], but is fighting for the democracy and freedom of Denmark’. (p.38-39) Further, there is evidence to suggest that other Danish neo-Nazis, as well as members of the BNP and the National Front, have attended SIOE and SIAD events. (p.38, 47)

– Stop Islamization of America is the U.S. branch of the SIOE umbrella group, and was entrusted by its leadership to Pamela Geller and Robert Spencer in January 2010. Geller and Spencer have praised SIOE, endorsed its political programme, published its statements and expressed admiration for its leaders. (p.48-49)

– SIOA’s leaders have surpassed SIOE’s defence of war criminal Radovan Karadzic, (which included offering justifications for his actions), by defending Karadzic and Ratko Mladic, denying Serbian atrocities including the Srebrenica genocide, publishing the work of professional apologists for the Milosevic project, and in Spencer’s case working on an institutional level with such people to oppose an independent Kosovo. Ms. Geller has gone so far as to say that Bosnian Muslims killed themselves in order to ‘manipulate media coverage’, and refers to the 1995 genocide as a ‘propaganda lie’ which was ‘manufactured [by] the international community’ as part of ‘the ongoing blood libel against the Christian Serbs’. (p.42-43, 53-54 and here)

This is presumably what Mr. Spencer means when he writes of SIOA’s ‘opposition to the jihad in the Balkans and skepticism (sic) about some of the charges made of Serbian war crimes.’

– SIOA’s leadership has supported, defended and praised the English Defence League, (without equivocation until recently), and has promoted their events, published their statements and attacked their critics. (p.55-59) Co-director Pamela Geller’s web log has featured conspiratorial articles regarding the President of America’s religion, his family, his sexual history, and the circumstances of his birth, and has likened his ‘stealth jihad on the White House’ to ‘an SS officer getting elected president during WW II’. (p.52-53) In 2010, Robert Spencer defended his and Geller’s ‘colleague’ Joseph John Jay, who had recommended the ‘wholesale slaughter’ of Muslim civilians, including children, on the grounds that he had been ‘misinterpreted’. Spencer maintains this still, and Ms. Geller has recommended Jay’s writings as recently as July 2011. (p.51-51)

I could go on, but I ought to address Mr. Spencer’s direct challenge regarding a quote of his which we included. Here is the quote, published on his Jihad Watch site in 2005: ‘there is no distinction in the American Muslim community between peaceful Muslims and jihadists. While Americans prefer to imagine that the vast majority of American Muslims are civic-minded patriots who accept wholeheartedly the parameters of American pluralism, this proposition has actually never been proven.’

Writing today, Spencer claims ‘what [he] meant was there is no institutional distinction, so jihadis move freely in Muslim circles among those who oppose them and claim to do so’. However, when asked by a commenter on the original article in 2005 ‘how distinctions can be made’, Spencer replied: ‘That’s simple. Let American Muslims renounce all attachment to violent Jihad and Sharia, refuse all aid from Sharia states (chiefly Saudi Arabia), and cooperate fully with anti-terror efforts aimed at rooting jihadists out of American mosques.’ (p.52) Having thus identified all Muslims as suspects who are guilty until proven innocent, Spencer does not specify how to treat Muslims who do not ‘cooperate fully’, or who fail to make the prescribed disassociations. But based on his record and the company he keeps, I’m glad we’ll never have to find out what it might entail.

I think this meets Mr. Spencer’s challenge, and I’m grateful for the opportunity to bring all of this to people’s attention. I’m not sure how one squares the above with the claim that SIOA ‘stand[s] for the freedom of speech, the freedom of conscience, and equality of rights for all people’. Perhaps Mr. Spencer will enlighten us.