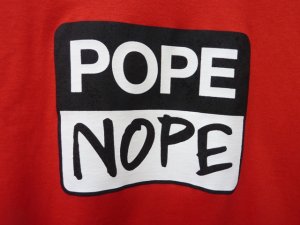 One Law for All Protest the Pope

One Law for All is adding its support to Protest the Pope. Spokesperson, Maryam Namazie, will be speaking at the 18 September march and rally beginning at Hyde Park Corner at 1.30pm http://www.protest-the-pope.org.uk/

One Law for All’s opposition to Sharia courts and religion’s adverse role in public life necessitates a criticism of the Pope and Vatican.  Whilst the Pope is free to travel to meet his supporters, he cannot be free from criticism, particularly given that his visit is a state one and because of his and the Vatican’s regressive. Amongst other things, the Pope and Vatican are opposed to equal rights for women and homosexuals as well as condom distribution to AIDS-ravaged societies in Africa. They have refused to address many thousands of cases of child sex abuse and torture, deliberately perverting the course of justice in these cases, and moving predatory priests from location to location giving them the opportunity to re-offend. Moreover, the Vatican encourages the de-secularisation of societies around the world, attempting to directly influence law-makers and impose religious dogma, whilst offering a direct and powerful endorsement of other non-secular and medieval laws, including Sharia.

Public funds must not be used for the Pope’s estimated £20 million visit to spread his homophobia, misogyny and inhumanity.  This is nothing short of scandalous when his visit comes at a time when public spending and wages are being cut or frozen so dramatically.

The Pope and Vatican represent a threat to secularism and human rights worldwide. One Law for All urges its supporters to join the 18 September protest against religious bigotry and in defence of equality, universal rights and secularism.