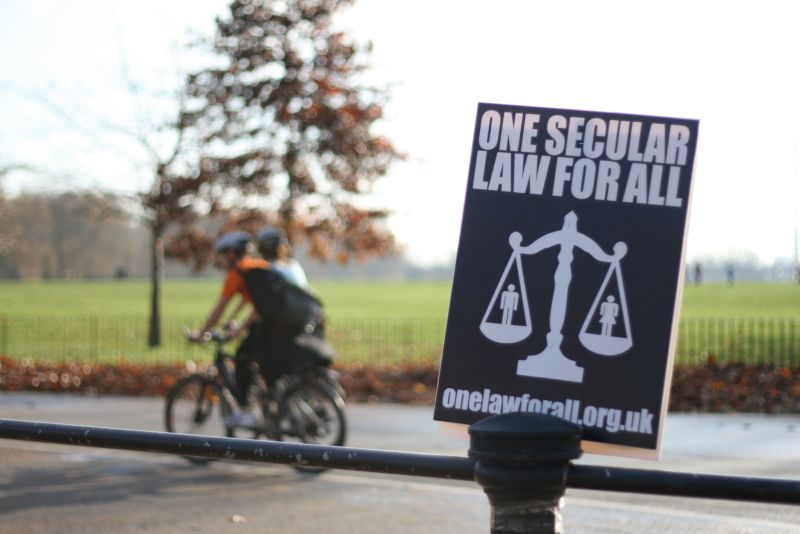 One Law for All requests urgent clarification of law

I am writing to request an urgent clarification of the law.

I represent the One Law for All campaign. We campaign against the increasing use of sharia law in Britain, as well as maintaining an active anti-racist stance. I would appreciate your urgent response to the following questions.

1) Is the practice of family law permitted under powers provided by the Arbitration Act 1996? According to the website of the Muslim Arbitration Tribunal, family cases are indeed being decided, in accordance with sharia law, using the power of the Arbitration Act. As you may know, sharia law accords the testimony of a woman only half the value of that of a man. Child custody is decided in the father’s favour regardless of the circumstances of the case. Inheritance favours male family members who are awarded double that of females. Men can obtain divorce by repudiation while it is extremely difficult for a woman to obtain a divorce, regardless of the circumstances.

On September 14th 2008, then Shadow Home Secretary (now Attorney General) Dominic Grieve was reported in the Times as stating the following:

“If it is true that these tribunals are passing binding decisions in the areas of family and criminal law, I would like to know which courts are enforcing them because I would consider such action unlawful. British law is absolute and must remain so.”

2) Is criminal law applied equally to all UK citizens and residents or is it permitted that criminal cases be heard and decided under self-appointed and self-regulated tribunals? The Muslim Arbitration Tribunal has declared that it hears and decides upon domestic violence cases. As you know, domestic violence is a criminal offence in the United Kingdom and is liable to punishment up to and including imprisonment. However, under sharia law, victims of domestic violence are frequently required to remain within abusive marriages and no punishment is handed down to perpetrators.

More recently, on October 14th 2010, Sheikh Maulana Abu Sayeed, president of the Islamic Sharia Council in Britain, declared that rape within marriage is “impossible”. Sheikh Sayeed stated that sharia tribunals have decided upon cases of rape in Britain, and that the ‘punishment’ can amount to nothing more than an apology by the perpetrator to the victim. Like domestic violence, rape is a serious crime in the United Kingdom and punishment includes the imprisonment of offenders.

Please clarify under which law sharia tribunals are permitted to adjudicate on cases of rape and if no such law exists, whether such activity is permissible in the UK. If, as I suspect, it is not, please clarify what it is that the coalition government intends to do to confront this injustice, and when.

3) Sharia councils are also active across the United Kingdom and operate as registered charities. These councils are acting as courts and handing down sharia based rulings which are inherently biased against women and children and result in unfavourable and unfair decisions against them. Please clarify whether any current charity legislation permits legal adjudication in accordance with sharia law, and if not, under which laws these councils are operating.

Under section 6 of the Human Rights Act 1998, all public bodies (which are defined as including courts and tribunals) must act in accordance with the provisions of the European Convention on Human Rights (ECHR). Article 6 of the ECHR guarantees a fair and impartial hearing for all people in judicial proceedings. As is evident, women subject to sharia law in Britain face gender-based bias from the outset; denying them a fair and impartial hearing as afforded by the Human Rights Act.

In your speech to the Conservative Party conference in October 2010, you stated the following:

“I want the message to go out to every corner of our country: this is a government that knows every British subject is born free, everybody is innocent until proven guilty and everybody is equal before the law. But let the message also go out that we will not tolerate anybody who seeks to abuse those liberties.”

Given that it is clear that Muslim women and children are subject to a less favourable legal system, and are awarded fewer rights and protections, than those of other faiths and none, please clarify if you intend to pursue this ideal and if you intend to bring an end to the injustice faced by a large number of UK citizens.

For further information and for evidence of the above claims, please see our report ‘Sharia Law in Britain; A Threat to One Law for All and Equal Rights’ which can be found on our website.

Yours sincerely,
Spokesperson
One Law for All
BM Box 2387
London WC1N 3XX
www.onelawforall.org.uk