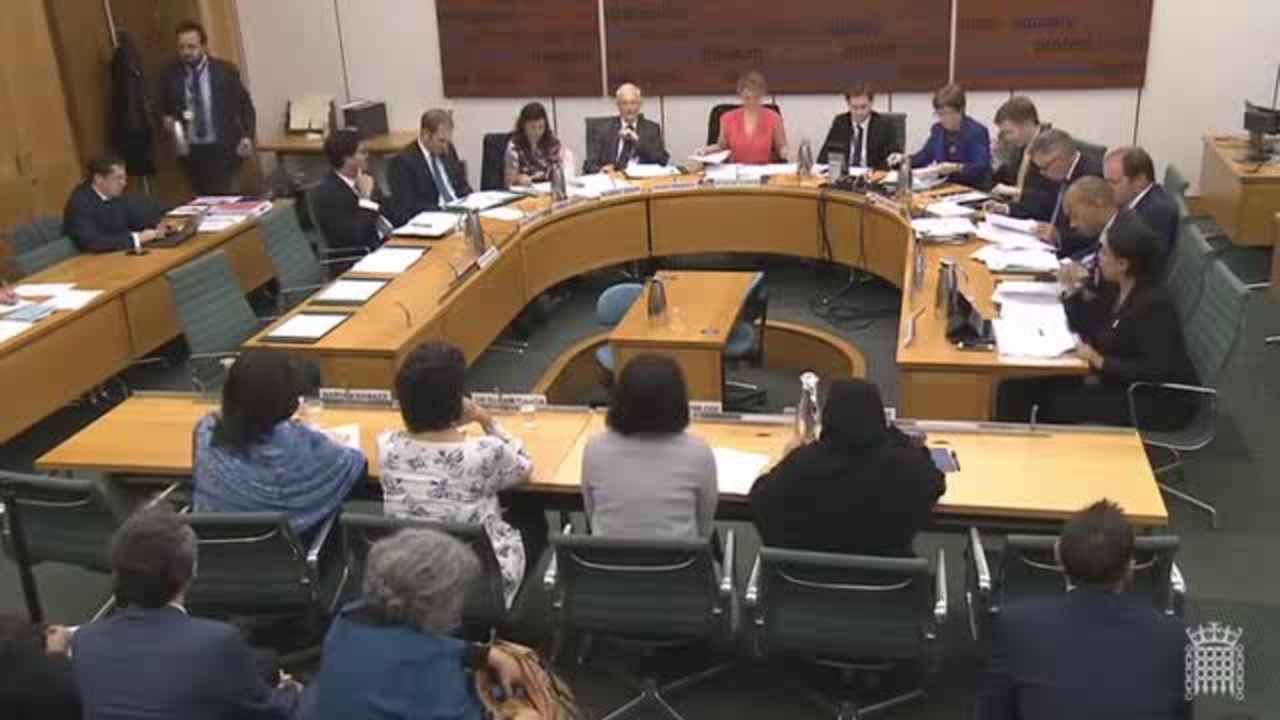 Areas of concern regarding Home Affairs Select Committee on Sharia

Written evidence submitted to Home Affairs Select Committee by Southall Black Sisters, the Iranian and Kurdish Women’s Rights Organisation, Centre for Secular Space, One Law for All, British Muslims for Secular Democracy and the Culture Project, including on Evidence Session held on 1 November.

We refer to recent emails from the Home Affairs Select Committee to Southall Black Sisters and the Iranian and Kurdish Women’s Rights Organisation requesting us to help find Muslim women who have ‘used’ Sharia Councils, to attend an event in Whitechapel, East London, on 24 November 2016 in connection with your inquiry.

We are a coalition of organisations who have an immense track record in providing front line services and in campaigning for the human rights of black and minority women. Our coalition includes Southall Black Sisters, the Iranian and Kurdish Women’s Rights Organisation, Centre for Secular Space, One Law for All, British Muslims for Secular Democracy and the Culture Project: we represent some of the most marginalised groups in our society. Between us, we have over 100 years of combined experience of working with women from all faith backgrounds, the majority of whom come from a Muslim background.

Many of us have supported minority women, adults and children of all religious backgrounds to resist powerful cultural and religious constraints that prevent them from exiting from violence and abuse and impede their ability to assert their rights as citizens of this country. It has taken long and often painful struggles to give minority women a voice and to facilitate their access to the formal legal system that many see as their ultimate safety net. We have seen that, without proper and informed access to the civil and criminal justice system and to the welfare state, women are left to the vagaries of arbitrary and discriminatory systems of community arbitration, including Sharia Councils – the subject of the current inquiry by the Home Affairs Select Committee. The experiences of women in these circumstances suggest that such parallel legal systems create a lethal space for the resurrection and perpetuation of patriarchal control over and harm to women, vulnerable adults, and children. It is precisely because of these experiences that, in many parts of the Muslim world, women are resisting Sharia laws and religious impositions.

It is against this background, that we are compelled to raise three specific areas of concern that have arisen in relation to your inquiry:

1. First, we have to say that we are puzzled by your request for women who have personally used Sharia Councils to participate in the event in East London, and we are compelled to decline it for a number of significant reasons:

(a) Why is the Select Committee only interested in hearing from Muslim women who have ‘personally used’ Sharia Councils? There are an equal if not greater number of Muslim women who, for very valid reasons, do not wish to use these Councils out of fear and distrust arising from their own negative experiences of religious control in their communities. Many women confronting honour based abuse, for instance, will not use Sharia Councils because they feel angry and let down by their communities and religious authorities. Many recount the ways in which they have been subject to religious abuse of power, including sexual abuse, and for these reasons they are fearful of being subject to further abuse and humiliation in Sharia Councils. Their experiences and reasons for rejecting Sharia Councils are as valid as those who ‘use’ Sharia Councils. When will these women’s voices be heard?

(b) Many women that we see are deeply traumatised and still in crisis situations. They are often unwilling or fearful of taking part in events that involve revealing intimate details of their lives, especially of a sexual nature, in front of other people (even women) not known to them. Most fear making any kind of disclosure or of raising any criticism of religious authority in unfamiliar and unsafe environments. Our experience of providing counselling, group therapy and support for the extremely vulnerable women with whom we work is that they need to feel confident in safe spaces with which they are familiar before they will disclose their experiences. They have to develop a strong affinity with other women based on shared experiences and mutual respect before they open up to others, even if they are from the same community.

(c) It is impractical for some women who live in North and West London or even outside London to travel to East London. Many are extremely vulnerable or destitute, or have work or child care responsibilities that make it difficult for them to travel long distances. We therefore propose that the Select Committee gives serious consideration to our request to meet women who have used Sharia Councils as well as those who have not, in safe venues across London and the UK, with the support of their advocates and to also consult and take evidence from their advocates who can speak to their experiences. SBS and IKWRO for example, are willing to facilitate access to women who use their services by organising a closed session at the premises of SBS, in West London, where advocates and counsellors will also be on hand to provide evidence and additional support to the women who attend.

2. We are concerned that the inquiry sessions on Tuesday 1 November 2016, at which witnesses were invited to present their evidence, were highly unbalanced and weighted in favour of those who support Sharia Councils in some form or other.

(a) The sessions consisted of 3 panels of witnesses. Out of a total of ten witnesses who appeared, seven spoke in favour of Sharia Councils (four of whom actually ran Sharia Councils), one remained neutral and only two witnesses – Dr Elham Manea and Ms Maryam Namazie – were called to present their counter arguments. We note that some of those who gave evidence were invited to do so even though they had not made any written submissions to the inquiry.

(c) In our view, the inquiry needs to hear evidence from expert witnesses who can provide specific examples of how abused women have been re-traumatised and placed at risk following their engagement with Sharia Councils. Most of the abused women that use our services seek a divorce only after they have left abusive relationships, but they are almost always compelled to return to the abuse by Sharia Councils and other religious arbitration bodies, even if this breaches civil and criminal laws and good practice and policies in respect of mediation and reconciliation in gender-based violence cases. In other words, they are forced back underground.

(d) It must be a matter of concern that the Select Committee appears to have chosen not to hear from witnesses experienced in front line advocacy work with BME women – work which has necessarily involved the invocation of human rights and equalities legislation to challenge Sharia laws. The Public Sector Equality Duty for example has been successfully invoked to address the ways in which fundamentalist interpretations of Sharia laws have been utilised by advocates of parallel legal systems to demand gender segregation in public spaces and Sharia compliant wills in inheritance matters. These very same fundamentalist interpretations of Sharia laws are invoked in Sharia Councils and the Muslim Arbitration Tribunal. We are also worried about the focus of the inquiry on divorce when these ‘courts’ address everything from polygamy, child custody, domestic violence, marital rape, marital captivity, forced marriages and more.

3. Finally we wish to place on record our concern about the line of questioning of Maryam Namazie at the evidence session referred to above.

(a) In particular, the tone and manner in which she was allowed to be questioned by Naz Shah MP brought discredit to the Select Committee and its approach to the issues under scrutiny. In particular, the specific suggestion that Maryam Namazie was ‘anti-faith’ appeared to provide a pretext to discount Maryam’s evidence: such tactics can and do contribute to a culture that incites religious hatred and violence towards those, especially from Muslim backgrounds, who are perceived to be apostates, atheists and non-conformists.

(b) As you will be aware, we have already seen a rise in religiously motivated hate crimes towards so called apostates that has even led to murder in the UK. (See the case of Asad Shah who was killed in Glasgow in March 2016.) Given her own background, we would have expected Ms Shah to understand the dangers of portraying those who do not conform to their faith in such negative terms.

(c) We trust you will agree that, as an MP and member of the Select Committee, Ms Shah has a duty to exercise due care and to behave fairly to all the witnesses at all times, whether or not she agrees with them. In our view, she breached that duty in this instance, and we shall be interested to know what you have to say in that regard.

We hope that you will give serious attention to the concerns we have raised. Please treat this letter as a submission to the inquiry. We are also attaching an open letter by us regarding the government’s review of Sharia Councils setting out our concerns which are relevant to this inquiry too.

Please do not hesitate to contact us if you need any clarification or have queries arising from the contents of this letter.