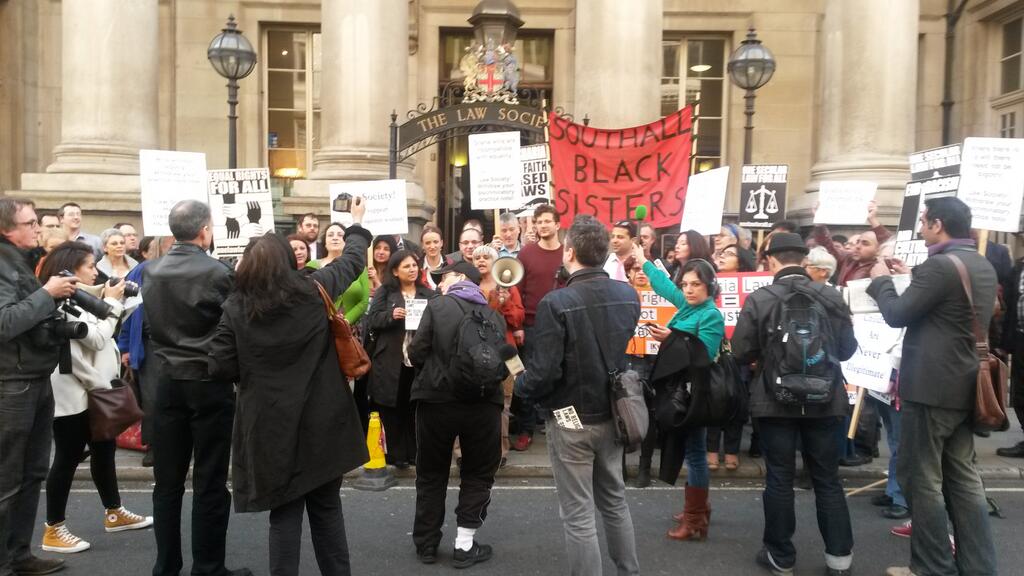 Open letter to the Home Secretary: The law and not religion is basis of justice for citizens

For more information on the open letter, please contact Pragna Patel (Southall Black Sisters), Gina Khan and Maryam Namazie (One Law for All) and Gita Sahgal (Centre for Secular Space). Contact details below.

As a group of women’s human rights organisations and campaigners, we express our profound concern and disappointment with the terms of reference and recent appointments to the government’s ‘independent review’ on Sharia councils and arbitration forums in the UK. We attach previous correspondence on the issue: (Correspondence-with-Government-on-Sharia-Courts).

For several years, we have been highly critical of the ways in which, in the name of religious tolerance and freedom, the government and state institutions have kow-towed to demands made by leaders and spokespersons of the religious-right. This has resulted in the accommodation of arbitration systems based on minority religious personal laws. We have been alarmed at the growing acceptance of such personal laws to govern private and family matters: areas where, arguably, the greatest human rights violations of minority women in the UK take place.

There is considerable evidence to show how these parallel religious ‘legal’, mediation and arbitration systems operate in ways that violate the fundamental principles of protection, equality and non-discrimination in respect of women’s rights in relation to marriage, divorce, children, property and inheritance. See for example: “Women and Sharia Law: The Impact of Legal Pluralism in the UK” by Elham Manea published in May 2016, which documents the harmful and even life threatening consequences for vulnerable minority women who are denied the right to equality before the law.

Precisely for these reasons, we had welcomed the ‘independent review’, believing it to be a genuine attempt to look at the work of Sharia councils and Muslim arbitration tribunals in the UK in the context of rising religious extremism and fundamentalism and its impact on the human rights of black and minority women. Nevertheless it is evident from the limited terms of reference and the makeup of the review panel that the review is in danger of becoming seriously compromised and as such, we fear that it will command little or no confidence.

Below we set out four of our major concerns:

1) The terms of reference of the review: The terms have ruled out a full evaluation of the harm caused by the existence of discriminatory religious ‘legal’, mediation and arbitration systems. Our information suggests that the existence of parallel or informal justice systems in itself creates conflicts in law and gaps in human rights protection. Yet we note that the review is not addressing this vital issue. Instead, the terms of reference suggest that the task of the review is to improve the functioning of systems that are discriminatory in effect and intent. We urge you to remove wording on ‘seeking out examples of best practice in relation to governance, transparency, and assuring compliance and compatibility with UK law’. Instead, the review should be free to examine whether the existence of sharia councils, mediation and arbitration systems undermine access to justice, and indeed undermine the Constitution by endorsing the existence of parallel legal systems.

2) The panel: Although some of those appointed to the panel come from judicial and family/children law backgrounds, two Islamic ‘scholars’ have been appointed as advisers to the chair, Mona Siddiqui who is herself a theologian. This is cause for alarm: the government has constituted a panel more suited to a discussion of theology than one which serves the needs of victims and is capable of investigating the full range of harms caused by Sharia councils and tribunals, particularly for women.

The inquiry panel should be an impartial Judge-led investigation into the entire spectrum of human rights violations caused by the existence and functioning of Sharia councils and tribunals. It should be clearly framed as a human rights investigation not a theological one.

2 a) Competencies of Advisers to the panel: The inquiry should be properly advised by women’s rights advocates and legal experts in British and foreign laws and international human rights covenants. Advisers to the panel need to have a track record of respecting and protecting human rights, particularly those of women. They need to understand the impacts of informal justice and parallel legal systems on women (and indeed on minorities). They need to be conversant with existing laws regarding, for instance, the recognition of civil divorce in many jurisdictions; and be able to find appropriate experts to give evidence to the panel. They also need to be able to assist the panel to investigate transnational fundamentalist networks in promoting Sharia law in different countries and their role in Britain. They need to be fearless in looking for evidence even if it implicates powerful interests.

2 b) Imams are not the right advisers: Theologians and religious scholars simply do not have the requisite skills or knowledge of existing legal practice and constitutional issues. Knowledge of theology is simply not the same as knowledge of the law either in Britain or elsewhere.

The government should be wary of replicating the most problematic aspects of multiculturalism in the constitution of the review. Many legal academics in Britain promote legal pluralism, which they see as community-based law. This anthropological and theological approach to law tends to ignore statutory law and evolving case law in countries that have Sharia or Muslim personal laws. The Law Society took this approach with its practice note on ‘Sharia Compliant Wills’. It advised solicitors to ‘ask an Imam’ when drawing up a will. As you may recall, the Law Society was forced to withdraw their guidance because it was not only discriminatory but dangerously negligent. The government must not repeat the mistakes of the Law Society.

2 c) Imams/ Scholars cannot investigate themselves: Both ‘scholars’ advising the panel are on Imams Online. The terms of reference state that ‘the role of particular groups and Islamic authorities in England and Wales’ should be examined. The inquiry should not be deterred from investigating a particular platform because they are advisers to the panel. Nor can the inquiry be seen as impartial if it is charged with investigating itself. We are aware of extremely problematic positions taken by scholars on Imams Online on a range of issues that should certainly concern the inquiry.

3) Issues before the inquiry: It is vital for the inquiry to include examinations of whether violations of human rights are condoned or even promoted by Sharia bodies. Some examples are: women’s testimony being worth half that of a man’s, marital rape, sexual violence and domestic abuse, the age of consent, guardianship, forced marriage, honour based violence, ritual abuse, child custody and child protection, polygamy, divorce, sexuality, inter-religious relationships, female dress codes and abortion. Broader issues such as the treatment of religious minorities including minority sects in Islam, decisions pertaining to apostasy and blasphemy must also be examined to understand the full range of threats faced by people affected by religious laws, and indeed, by the State promoting these laws.

The reasons why Sharia councils and other religious arbitration bodies have operated with impunity need to be carefully examined. The inquiry should be able to summon witnesses who will give evidence of whether local councils, police, or departments of government have developed working relations with Sharia councils and whether these relationships have undermined the protection principle laid out in key legislation on discrimination and the rights of women and children and/or shielded them from adequate scrutiny. Has the goal of preventing violent extremism actually led to strengthening relations with fundamentalist networks and individuals?

4) Implications for the scope and impartiality of the inquiry: The terms of reference and composition of the panel amount to an acceptance of a theological basis for laws for citizens from minority communities. Furthermore, they evidence a capitulation to religious and conservative forces who wish to ensure that the needs and identity of minority women are addressed only through the prism of conservative religious values of which they are the sole arbiters. In effect, rather than being treated as independent persons with citizenship and human rights, minority women are regarded as members of their so-called religious communities who are assumed to be subjected to religious codes. As we understand it, the review was meant to be, not about religious or theological issues categorised as either ‘moderate’ or ‘extreme’ but an examination of women’s access to rights and justice. It is patronising if not racist to fob off minority women with so-called religious experts who are self-serving and who wish to legitimate Sharia laws as a form of governance in family and private matters. Even if some women appear to want this, we cannot stand by and watch the State being complicit in underwriting second-rate systems of justice, whereby minority women are treated as unequal before the law.

By making these religious appointments, the government has lost a vital opportunity to examine the discriminatory nature of not only Sharia councils but all forms of religious arbitration fora including the Batei Din. Our fear is that in these circumstances, many vulnerable women simply will not want to give their testimony before theologians who legitimate and justify the very idea of Sharia laws on the grounds that it is integral to their ‘Muslim identity’. Indeed, the panel is set up much like the Sharia ‘courts’ themselves.

The makeup of the review panel betrays a complete absence of representation of the voices of the victims themselves and of women’s human rights organisations that have first hand experience of the human rights violations that take place in Sharia councils and other religious arbitration fora. We see and applaud the consideration given to victims of injustice in the context of other government reviews and inquiries such as those established to examine historic child abuse cases and the Hillsborough disaster. We would have expected the same care and consideration to be given to the victims of Sharia councils.

Black and minority women deserve the right to have a review that is led by a Judge and aided by human rights and women’s rights experts including those from across the world who have confronted religious personal laws and jurisdictional challenges in the furtherance of human rights.

For the above-mentioned reasons, we call on the government to:

1. Ensure that the terms of reference are broad enough to have a thorough inquiry into the full range of human rights concerns raised by Sharia councils and tribunals.

2. Appoint a Judge to head the inquiry with the powers to compel witnesses to appear before it. The inquiry panel should be an impartial investigation into the entire spectrum of human rights violations caused by the existence and functioning of Sharia councils and tribunals.

3. Drop the inappropriate theological approach, and appoint experts with knowledge of women’s human rights, those who can properly and independently examine how Sharia systems of arbitration in family matters contravene key human rights principles of equality before the law, duty of care, due diligence and the rule of law. The inquiry must be clearly framed as a human rights investigation not a theological one.

The law and not religion is the key basis for securing justice for all citizens. We urge you to do the right thing to ensure that the same principles of human rights, equality before the law, duty of care, due diligence and the rule of law are applicable to all British citizens.