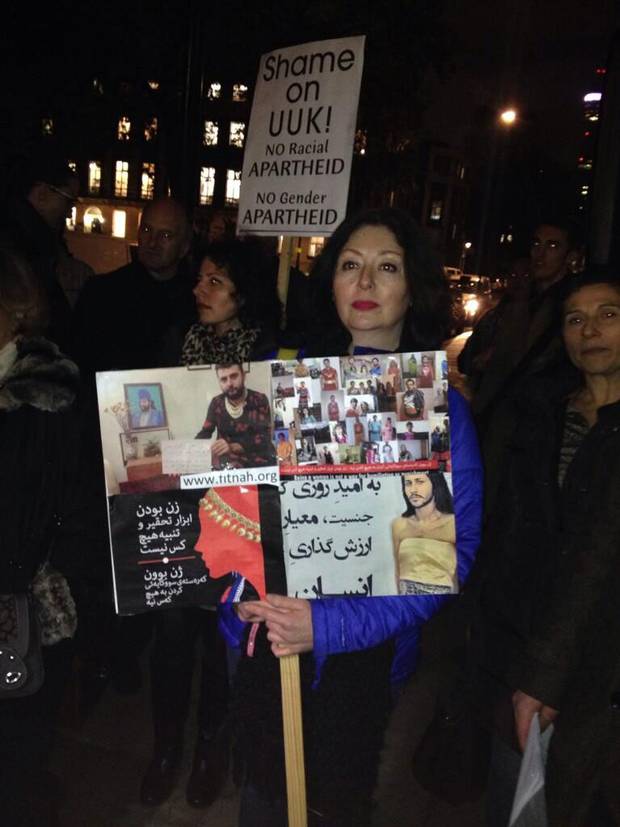 10 December rally against gender segregation at UK Universities a success

More than a 100 protesters rallied outside the office of Universities UK to condemn their endorsement of segregation of the sexes and demand gender equality on 10 December 2013, International Human Rights Day. Chris Moos, a co-organiser of the rally and Secretary of the London School of Economics Atheist, Secularist and Humanist Society was master of ceremonies.

For me, today is a particularly emotional moment. I stand here reminded of the heroic struggle waged against racial apartheid in South Africa, and yet find myself protesting against another form of apartheid that is also being justified with reference to that ubiquitous but flawed logic ‘separate but equal’. Who would have thought that in the 21st century, we would be protesting against policies adopted by institutions that should be in the business of producing and nurturing truth and knowledge, but which are instead endorsing the subjugation of one half of the human race? Who would have thought that in the 21st century, gender apartheid would become the new battleground?

UUK backs gender segregation and defends it. The reasons given- choice, human rights, freedom and the law- are all untested and spurious. This ‘advice’ is based on cowardice and proves collusion with fanatical religionists. Gender parity is non negotiable. UUK is unfit for purpose if it cannot understand that basic, fundamental value.

The word equality has only one meaning. It’s not the back of the bus and it’s not the side of the lecture theatre. This is not about telling women who want to sit separately that they can’t. This is about allowing external speakers to demand that the audience be segregated.

Opposition to gender segregation is an issue of fundamental freedom: people should be permitted to sit with who they like in a publicly funded university. It’s also a question of politics, though: we shouldn’t pretend that those who wish to segregate men and women view us as equals. They don’t. They think women are little more than a temptation to men; and they view men as uncontrollable predators whose view of women is on a par with that of uncovered meat.

With alleging that “genuinely held beliefs” of speakers or event organisers trump existing equality legislation and allow some groups to take away the basic right of people to choose where to sit, Universities UK has become the laughing stock of the legal profession.Universities should be spaces where we all are treated equally no matter what their beliefs are. By proposing a framework that would allow a small minority of religious fundamentalists, who do not represent religion or religious people to impose their beliefs on others, Universities UK has set a dangerous precedent that would lead to students to be singled out and refused access to certain areas of their institutions merely on the basis of their gender. The right of individuals to express themselves freely within the law does not extend to the right of groups to impose their sensibilities or preferred seating order on others.

By bending to the Muslim Far-Right’s supposedly-religious diktats of segregating sexes on university premises, UUK also endangers further the women and men of Muslim descent – believers and unbelievers alike – who stand both against fundamentalism and against xenophobia and discrimination, in increasingly difficult circumstances.

The people who approved this policy are unfit to hold any public office – and should resign. Universities once pioneered the Enlightenment and liberal, progressive values. Now, it seems, they appease misogyny and cave in to religious sexism and intolerance. The right of women and men to sit where they like is not negotiable… Universities have a moral and legal duty to uphold equality and respect for all. If they don’t, we will fight them, just like the Suffragettes fought male chauvinism 100 years ago.

Maryam Namazie, co-organiser of the protest and Spokesperson for Fitnah and One Law for All ended by saying:

We will continue the fine tradition of the anti-apartheid movement and Nelson Mandela but also the ongoing resistance of the people of Iran and elsewhere against gender apartheid by breaking up segregation wherever we can. We are the new sex apartheid busters and will go to segregated meetings at universities with women dressed as men (like Iranian women who dress as men to enter football stadiums where women are banned) or as men dressed in drag (like the men who did so to support women’s rights after the Islamic regime in Iran paraded some men in the streets of Iranian Kurdistan wearing women’s clothing because according to them being a woman is the greatest source of humiliation).

UUK and Islamists: you have been warned! Gender segregation is as intolerable as racial segregation and cannot be permitted at our universities.

Other speakers at the rally included: Ahlam Akram, director of Basira; Georgi Laag, founder of London Atheist Activist Group; Sean Oakley, founder and former president of Atheist, Humanist and Secularist society; Helen Palmer, chair of the Central London Humanist Group; Abhishek Phadnis, President of the LSE Atheist, Secularist and Humanist Society; Erin Saltman, Research Project Officer at Quilliam Foundation; Taj Hargey, director of the Muslim Educational Centre at Oxford and an Imam at the Oxford Islamic Congregation was one of those who sent messages of solidarity.

Soon after the rally, which received widespread coverage, including when Prime Minister David Cameron intervened to oppose sex segregation at universities, UUK was forced to withdraw its guidance. Whilst this fight has been won, the battle continues particularly since sex segregation is still taking place at universities and UUK has said it hopes to redraft the guidance.

The Campaign against Gender Segregation at UK Universities will continue to press on until it is made very clear that there is no room for segregation of the sexes in public places like universities, including by organising teams of sex apartheid busters to break up gender apartheid at universities and hold a huge march against sex apartheid on 8 March 2014, International Women’s Day. We are also getting legal advice.

Photos of the 10 December rally can be found hereand here.

The open letter kick-starting the campaign against UUK on 23 November was signed by philosopher A C Grayling; Scientist Richard Dawkins; women’s rights campaigner Yasmin Rehman; Terry Sanderson, President of the National Secular Society; and Fatou Sow, Coordinator of Women Living Under Muslim Laws, amongst others.

In a short time, the campaign has received widespread support.

Media coverage of the protests can be found below:

Sexual apartheid: Is there any room for gender segregation, This Week, 12 December 2013 [external link]

‘We will fight them like the suffragettes’: Protesters target Universities UK over sex segregation policy, Politics, 11 December 2013 [external link]

The segregation of women and the appeasement of bigotry at UK’s universities, The Spectator, 11 December 2013 [external link]

Why we are protesting against gender segregation this evening, Left Foot Forward, 10 December 2013 [external link]

Other press coverage can be found here.

For more information, contact:
Maryam Namazie
Fitnah – Movement for Women’s Liberation
One Law for All
maryamnamazie@gmail.com
077 1916 6731