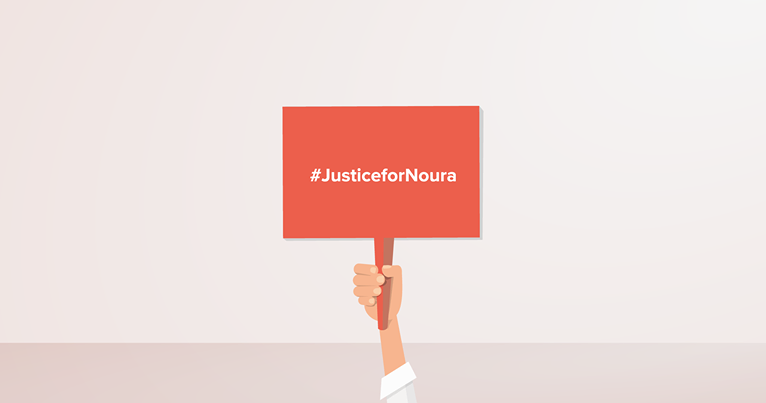 On 10 May 2018, Sudanese authorities will announce the verdict for Noura Hussein Hammad – an 19 y.o. Sudanese female who is facing a death sentence.

When Noura was 15 y.o. she was forced to marry a man. First, the written arrangement between the families was done, and, as Noura turned 17 y.o. the formal marriage was set. To avoid the forced marriage, Noura run away to another city. However, she was deceived to return by her own father on the promise that the marriage was cancelled.

In May 2017 after Noura was forced to take part in her own wedding ceremony and after she was sent on a “honeymoon” with her “husband”, she refused to have sex with him for 5 days. On the 6th day the “husband” called his brother & cousins who held Noura’s arms and legs, while he raped her. On the 7th day, as he entered the room to rape her again, Noura killed him with the knife that he brought with him to threatened her.

After that she immediately reported herself to her family. Noura’s father brought her to the police and left her there. Since then Noura has been in prison.

In the end of April 2018 the court issued an official decision that Noura was guilty of pre-meditated murder. Under Islamic law of Sudan, Article 113, a person guilty of murder is either put to death by hanging or has to pay “blood money” or Deeya to the family of the “husband”. Noura’s forced marriage, ‘marital’ rape, or other forms of gender-based violence against her, cannot be used as evidence to alleviate the sentence.

On 10 May 2018, the family of her “husband” will give a statement to the court demanding Noura’s immediate death (they have made it clear that they won’t accept deeya or blood money, even though some organisations stepped up to pay it). Following this, the final verdict will be announced.

Noura, who is a victim of child marriage, forced marriage, rape/marital rape, honour based violence and violence against women, has no social support because her family abandoned her. She became family’s “shame”. Her legal defense was provided by formal legal aid.

A group of Sudanese and international activists have mobilised to work around the clock to save Noura’s life. They are running a FB Support Page and launched Avaaz Petition. They mediate with lawyers, visit Noura in prison and translate letters of support.

Please sign the petition, share it and publicise this case through your channels. Even though Noura’s death sentence is almost imminent, we still hope that the pressure from International community can make a difference.

Noura’s case is significant for many reasons: Not only because she is one of the many women in a similar situation – subjected to patriarchal male violence, blamed and abandoned by community, at the mercy of religious laws, without recourse to justice. She is also one the many women who refused to submit to this violence and stood up to defend herself.

She is one of the females, including many in Europe, paying the price for a legal system that fundamentally fails women.