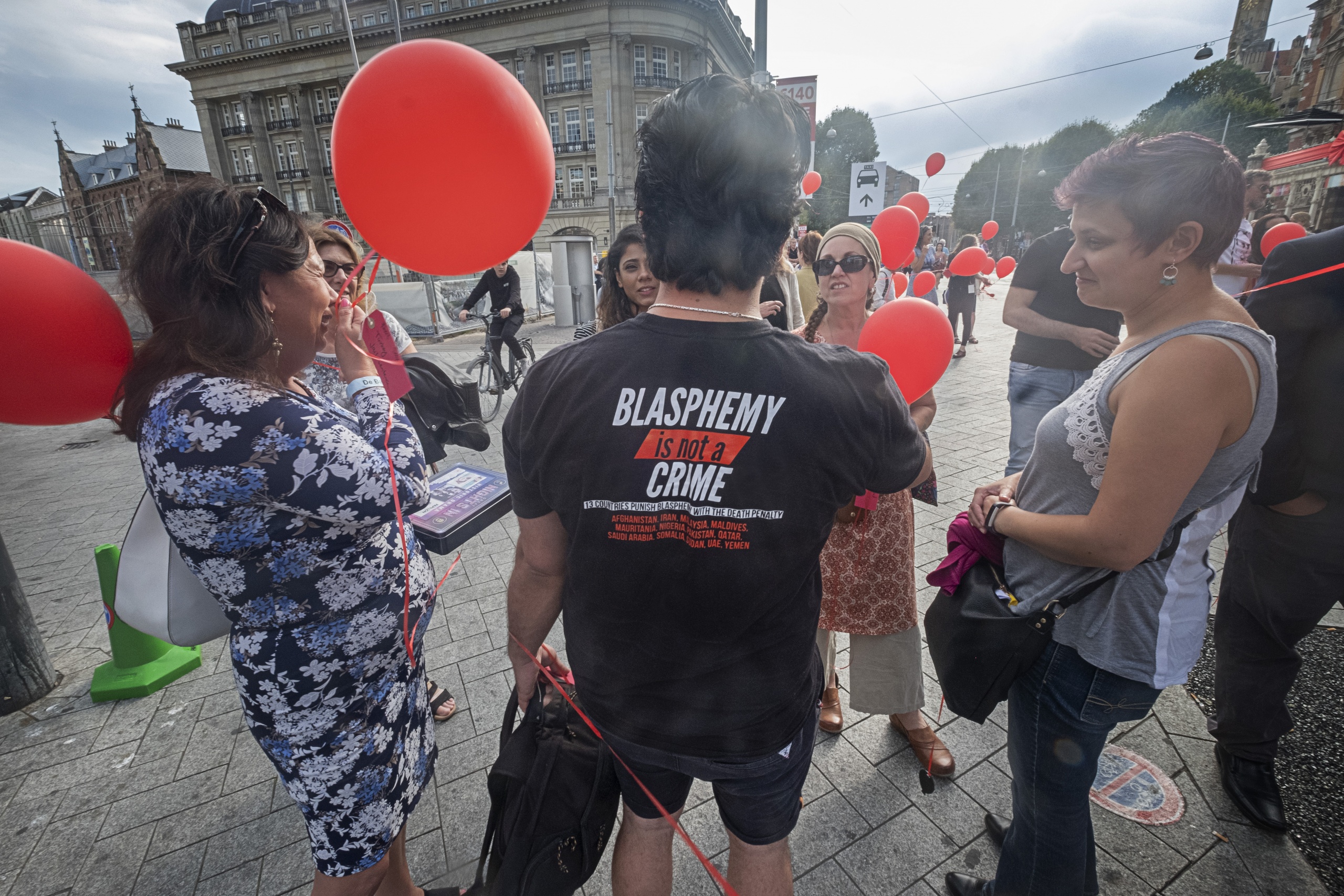 Stand with the witches, heretics and blasphemers, Interview with Maryam Namazie, sister-hood, 10 September 2019

Stand with the witches, heretics and blasphemers, Interview with Maryam Namazie, sister-hood, 10 September 2019

Maryam Namazie is an Iranian-born writer and activist. She is the Spokesperson for Fitnah – Movement for Women’s Liberation, One Law for All and the Council of Ex-Muslims of Britain. She hosts a weekly television programme in Persian and English called Bread and Roses. sister-hood interviewed her after the ‘Celebrating Dissent’ event she co-organised with the DeBalie venue in Amsterdam.

This is part one of a two-part interview.

What does the Council of Ex-Muslims do, and why is it necessary?

CEMB defends the rights of those who leave or criticise Islam. Becoming an atheist is part and parcel of freedom of conscience and criticism of Islam or blasphemy is an integral part of free expression. Islam, like any other belief system, has to be open to criticism. Criticism of religion and the sacred has been integral to changing the world for the better. On an individual level, people should be able to leave a religion or say what they think without fearing for their lives. Unfortunately, for many, there are serious threats for doing just that. Blasphemy and apostasy are punishable by death in over a dozen countries under Sharia. Even here in Europe, ex-Muslims can face shunning, abuse, honour-related violence and threats from family and others for thinking out loud. Accusations of ‘Islamophobia’ further silence those who are merely fighting to live and think as they choose without shame, apology or fear.

When one can be killed for it, dissent – and especially the celebration of dissent – becomes a necessity both for resistance and change but also for one’s survival. Ask any closeted LGBT person what it felt like to come out of the closet and be okay with who you are. It’s the same for ex-Muslims. Many risk everything to come out. For most the risks are worth it so they can live lives of their own choosing, however imperfect.

We’re seeing an increasing number of vocal ex-Muslims, and many more who have quietly lost their faith. Do you think this speaks to a larger movement of people becoming disenchanted with Islam?

The fact that the Saudi government or a Pakistani high court judge equate atheism/blasphemy with terrorism, that the Egyptian government is producing a national plan to ‘confront and eliminate’ atheism and that the Iranian regime’s media outlets warn against the ‘tsunami’ of atheism reveals just how concerned Islamic states are with free thought amongst young people in particular. Social media and the Internet have enabled dissenters and freethinkers to find each other, to realise they are not insane or alone, and also to organise and build new forms of ‘community’. Social media is doing to Islam what the printing press did to Christianity.

I think even we ex-Muslims will be surprised at our sheer numbers: the extent of which will only really become clear once Islamism has been pushed back and people are truly able to say what they think without fear of punishment. At CEMB, we are overwhelmed with requests for help. We support around 600 ex-Muslims a month – everything from facilitating support groups, providing letters for apostasy asylum claims to finding refuges and preventing forced marriages.

You’re always drawing distinctions between Islam and Islamism. What is the distinction and why is it important?

Of course, there are important distinctions between beliefs and religious-Right or fundamentalist political movements and states. Beliefs are individual. Religious-Right movements like Islamism, the Christian-Right, Hindu-Right, Buddhist-Right and the Jewish-Right are not about individual beliefs, but about power and control. I think our focus should be on combating the religious-Right because once they are pushed back, religion actually becomes a private matter, and not one that regulates every aspect of society’s life. The impact of Christianity on Europeans before the Enlightenment and after is very different, not because its tenets changed – but because it was pushed into a corner. A religion that has been pushed back is forced to organise soup kitchens and homeless shelters instead of pulling out the tongues of apostates and burning witches. What is often forgotten is that even most believers disagree with the rules imposed by theocrats. If this is what people really believed, there would be no need for the herds of Hezbollah thugs, morality police and militia to keep people in line in places like Iran, Saudi Arabia and Afghanistan.

With regards to religion, though, whilst it is a private matter, there are a few things that must be said. Not every Muslim or Hindu or Christian thinks alike. For example, I was ‘born’ Muslim but I had never read the Quran or been in a mosque in Iran. I was from a secular family, as are many others. I think most people adapt their beliefs to 21st century lives and most people are better than the religions they have been born into due to a lottery of birth. Having said that though, I believe religion as an idea belongs to another time and place. Islam and all religions are filled with misogyny, homophobia, death, hatred of the other and the privileging and superiority of one’s tribalistic in-group. Religions are obsessed with women’s bodies and controlling them. Religions are an enemy of freethought, doubt and dissent. To be a good religious believer, you must do as you’re told without question or else! There is always the threat of punishment here on earth or in some afterlife. Wear the veil, look down, listen to your male guardian, accept that you are worth half of a man, stay in your place and if you don’t, there is flogging, imprisonment, stoning, honour killing and burning in hell to remind others to toe the line. Religion is the best form of social control.

And as I have said before, religion kills and should – like cigarettes – come with a health warning. So yes, everyone has a right to their beliefs, even if we disagree with them. But that doesn’t mean that beliefs should not be challenged or criticised or even mocked. Ridiculous beliefs deserve to be ridiculed. Having the right to a belief is one thing. Ensuring that belief is protected from ridicule or criticism is another. Also, when it comes to religion, it isn’t really a private matter, and that’s why criticism is so important. It is an industry, an organised crime syndicate with clerics and mullahs imposing their rules on everyone and making life a living hell for women, and sexual and other minorities in particular.

You’ve dealt with censorship and harassment from Muslims which might be expected, but also from people who consider themselves progressive, such as feminist groups. Why is this?

Unfortunately, we live in the age of identity politics, which sees only a homogenous ‘Muslim community’, led and represented by theocrats and Islamists. It ignores and even vilifies the social and political movements and dissent taking place ‘within’ – so some feminist groups end up siding with Islamic groups, which they believe are the ‘authentic’ voices of the ‘Muslim community’ rather than with us. Every feminist, however, is duty-bound to stand with the witches, heretics and blasphemers of the ‘Muslim community’ and not the sharia judges, ‘community leaders’ and parasitical imams. If you only care about ‘group rights’ when it comes to minorities, the rights of individuals – those labelled disobedient women, transgressive women, whores, troublemakers and the corrupt – are of no interest to you. This is a politics of betrayal.

Are there particular issues around women leaving Islam?

All religions, in my opinion, are anti-women. When it comes to Islam, controlling women is the most visible aspect of the control and rule of theocrats, which is why the Islamists are so obsessed with women’s veil and segregation and their erasure from public space. I think this is also why women are at the frontlines of resistance. They are the first targets; even the slightest transgression visibly erodes theocratic control. This is why in Iran, women who defy compulsory veiling rules are sentenced to decades in prison. Women’s transgression is the biggest threat to theocracies and clerics. The fight against Islam and Islamism in particular is a female one. That is why women are so prominent and will continue to be so.

One of the campaigning points of CEMB is to challenge the use of sharia law in the UK through the One Law For All campaign. Why did you launch this project and what are its aims?

Religious laws, including sharia, are at best discriminatory against women; at worst, they are inhuman and brutal. The fact that minority women are railroaded into losing their rights in the family in sharia courts in Britain should be a human rights scandal but unfortunately, it isn’t. Like the fight for the rights of ex-Muslims, the fight for the rights of minority women from Muslim backgrounds is considered ‘Islamophobic’ by many, so black and minority ethnic women are very much on their own in the fight for equal rights. Women’s rights in the family have been fought for by the women’s liberation movement. They belong to all women, including minority women.