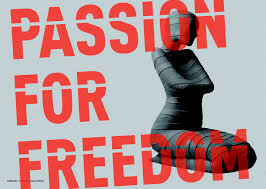 Passion for Freedom Art Festival is in its 7th year this week. The Art Competition was initially begun by One Law for All to promote  secular and universal values, one law for all, and equal rights for all citizens.

For two years now, however, One Law for All is no longer associated with the festival after it took positions that were opposed to that of the organisation’s. In November 2013, organisers introduced Tommy Robinson, former head of the far-Right English Defence League, as a special guest at a panel discussing a film Silent Conquest, which won an award at the festival. The film placed collective blame on Muslims who were deemed to be “conquering” Europe. Our then Spokesperson, Anne Marie Waters, was at the discussion but did not dispute the film nor Robinson’s introduction despite our organisation’s very clear position against the far-Right. Waters was asked to resign that same month.

In 2014, One Law for All Spokesperson, Maryam Namazie, who had spoken at every art festival since its inception did not attend the event and informed organisers that One Law for All would no longer be working with Passion for Freedom. In 2014, the festival, which professed to be non-political, was sponsored by the Israeli embassy, amongst others.

These changes in politics began to take hold after the festival was taken over by volunteers Agnieszka Kolek and Mariana Fox.  Their perspective is similar to the far-Right point of view that sees “Muslims” as a homogeneous community “conquering” western societies. In fact, “Muslims” or those labelled as such include progressive and anti-Islamist believers and non-believers. Those deemed “Muslims” are often the first victims of Islamism and at the frontlines of resistance to it. Moreover, this point of view supports – without question – the Israeli state at the expense of the Israeli and Palestinian people.

In their latest letter sent in September 2015, Passion for Freedom speaks of  “freedom for our Western societies” as if freedom is for the West alone and not a universal concept fought for and defended the world over.

Freedom is always the freedom of dissenters (as Rosa Luxemburg has said) – and those dissenters include many “Muslims” and non-Westerners.  Whilst Passion for Freedom uses films and art by non-Western artists who face great risks, they push a clash of civilisations narrative (in their defence of “our Western societies”) which effectively undermines the very artists being showcased.

One Law for All is outraged that an art competition it started and which was meant to unite humanity via art against the religious-Right is morphing into a tool of the Christian-Right.