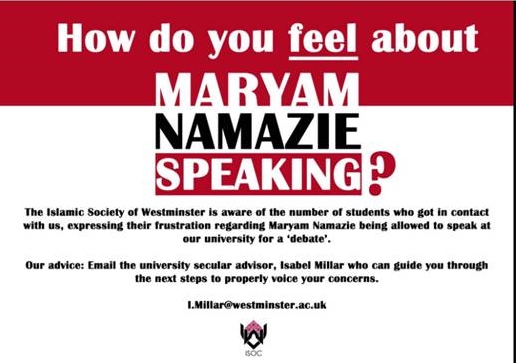 The below is a post by Spokesperson Maryam Namazie on restrictions faced when speaking at universities.

According to a recent report, more than nine in 10 UK universities are restrictive of free speech. This doesn’t surprise me at all. I continue to face restrictions of varying degrees, though this is changing due to the widespread push-back in defence of free expression.

Nowadays, I find that universities don’t bar me outright as Warwick University initially did nor do Islamic Societies (ISocs) organise to cancel and threaten my talk as at Goldsmiths. Their efforts are often more covert though no less sinister.

Take Westminster University where I will be debating Tariq Modood on Secularism and Diversity on 24 February. The Islamic Society didn’t call for an outright ban but issued a statement asking: “How do you feel about Maryam Namazie speaking?” (with the word feel underlined) and telling students to  contact the university secular adviser to “voice [their] concerns”. The Islamic Society getting in touch with its “feelings” is the same one that has members who refuse to speak to female staff and whose most infamous member was Jihadi John. Given that the event is to go ahead as planned, it will be “interesting” to see what ISoc members do on the day.

And this is an ongoing problem. When I spoke at an event organised by the LSE Human Rights Society on 27 January, the restrictions imposed were absurd. Initially I was meant to debate “whether human rights is possible under Sharia/Islamic Law” but those approached refused to debate me or pulled out at the last minute. One of those approached, Omer El Hamdoon, the president of the Muslim Association of Britain, asked to do a solo talk instead, which he did in November 2016. The stark difference in the way he and I were treated at LSE speaks volumes. Despite speaking on the very same topic (making the usual response of “what can you expect when you discuss Sharia” irrelevant), Hamdoon came and went without any concerns being raised nor any restrictions placed on his talk.

In contrast, my talk, which was initially meant to be a public event, was restricted to LSE students and staff due to “security concerns”, LSE followed “special procedures”, referred it to the “Communications Division” and imposed a chair whilst none of these were demanded of Hamdoon. When I arrived at the LSE on the night in question with a number of colleagues, the security told me I had to enter alone – instructions from the “very top” (the university eventually allowed me to enter with two of my colleagues).

It does make one wonder how I am the “security concern” (with instructions issued from the “very top”) whilst Hamdoon who has defended the shunning of ex-Muslims and death by stoning in an ideal Islamic state (audio available here) faces no restrictions whatsoever?

On 8 March 2017, I intend to return to Goldsmiths University with my co-Spokespersons Sadia Hameed and Imad Iddine Habib at the invitation of the Atheist Society to show Deeyah Khan’s recent film, Islam’s Non Believers. Again, here, the university’s Student Union has called for a “security meeting” with the organisers, decided to deny the public access to the event and will be showing a “safe space video” at the start. The SU has also insisted on filming the event themselves, and has told the Atheist Society not to do so.  Given that the Student Union tried hard to have the video showing the Goldsmiths ISoc’s harassment and threats removed from Youtube, their motive is questionable to say the least.

What these examples show very clearly are that many universities continue to buy into the Islamist narrative. The ISoc is seen to be the “legitimate” representative of “Muslim students” and dissent is seen through their eyes. Freethinkers and “apostates” are the threat and “security concern” not those who are actually inciting violence. The restrictions blame the victim and help normalise de facto blasphemy and apostasy rules at universities which should be bastions for freedom of thought and expression, including the criticism of ideas deemed sacred and taboo by religion and the religious-Right.

As I have said many times before, limiting free expression to that which is acceptable for the Islamists restricts the right to speak for those of us who need it most. For many of us, it is the only way we can fight to breath, to challenge those in power who stifle us, and to demand change.

It’s not a luxury and it is certainly not up for sale.

A few words of warning:

For the ISocs and their buddies in the Student Unions who try and impose the Islamist narrative and de facto blasphemy and apostasy laws:

I belong to the same movement that is bringing Islamism to its knees in Iran, Rojava, and elsewhere. No amount of restrictions will prevent me from speaking and standing with secularists – including many Muslims – who daily challenge the religious-Right at great risk to their lives.

For the far-Right (the mirror image of the Islamists) and those who have bought into the far-Right narrative of placing collective blame by equating Muslims and migrants with Islamists:

Crying crocodile tears for the “loss of free expression” whilst simultaneously calling for a ban on the Quran and Islam without any sense of irony doesn’t make you “defenders” of free expression – far from it.