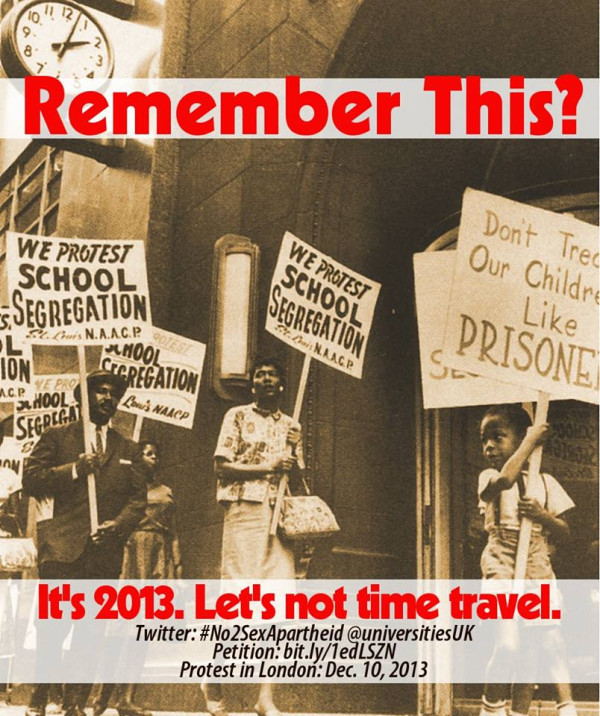 Joint statement of Southall Black Sisters, One Law for All, Fitnah – Movement for Women’s Liberation and LSE SU Atheist, Secularist and Humanist Society

We are pleased to learn of the legal note submitted to Universities UK (UUK) yesterday in the name of Radha Bhatt, a student of Cambridge University, against their Guidance condoning gender segregation.

We share Radha’s apprehensions that gender segregation reinforces negative views specifically about women, undermines their right to participate in public life on equal terms with men and disproportionately impedes women from ethnic and religious minorities, whose rights to education and gender equality are already imperilled.

Radha’s legal submission makes it unmistakably clear that despite UUK’s protestations, the law could scarcely be more unequivocal on gender segregation. The practice is specifically condemned by the Equality Act as amounting to less favourable treatment of women. We hope it will be noted that this condemnation applies equally to ‘voluntary’ segregation, a notorious misnomer used to pressure students to comply with ‘Mixed’ and ‘Segregated’ zones.

The existing rights legislation recognises that gender segregation undermines the dignity of both men and women and creates a hostile, degrading and humiliating environment. We hope Radha’s representations will remind UUK of its Public Sector Equality Duty towards the imperatives of eliminating discrimination, advancing equality of opportunity and fostering good relations between those who share protected characteristics.

Abhishek Phadnis, President of the LSE SU Atheist, Secularist and Humanist Society commented: “The beliefs of visiting speakers are no excuse to legitimise discrimination against women or any group. We applaud Radha for her principled and courageous stand, and hope that UUK will heed her solicitors’ advice to redraft its guidance to reflect the manifest illegality of gender segregation. Following up on our rally against gender segregation, we are looking forward to continuing to work with Southall Black Sisters, One Law for All and Fitnah – Movement for Women’s Liberation to ensure that the rights of all students in the UK are fully upheld at all times.”

Pragna Patel of Southall Black Sisters commented: “We welcome the legal advice which clearly states that UUK’s position on gender segregation in universities breaches both domestic and international human rights and discrimination law in substance and in process. We note that not a single women’s rights organisation was consulted about the guidance. Had it gone unchallenged, it would have had a profoundly detrimental impact on black and minority women who already struggle to assert their fundamental rights to education, freedom and independence. The whole sorry affair is symptomatic of a bigger battle waged by the religious right (aided and abetted by public bodies like the UUK) to control women’s minds and bodies. We must remain alert to the dangers of religious fundamentalism in all religions because its very goal is to use public spaces to gain power and to destroy the very principles of democracy and the universality of women’s human rights.”

Maryam Namazie, spokesperson for One Law for All and Fitnah – Movement for Women’s Liberation said: “For too long, cultural relativists have excused discrimination against women in the name of ‘respect’ for religious beliefs. Whilst the right to belief is absolute, the right to manifest it is not. Equality must trump religious beliefs, particularly if we want to respect human beings rather than beliefs. Moreover, let’s not forget that Muslims are not a homogeneous group. Endorsing segregation of the sexes means siding with far-Right Islamists – like Hizb ut-Tahrir, the Federation of Student Islamic Societies, the Islamic Education and Research Academy and the Islamic Human Rights Commission – at the expense of rights and equality of many Muslims, ex-Muslims and others. We unequivocally support Radha’s stand and will continue to fight for an end to gender segregation at universities, including via teams of sex apartheid busters and a rally on March 8th.”

You can find regular updates on our campaign here.

Maryam Namazie
One Law for All and Fitnah – Movement for Women’s Liberation
maryamnamazie@gmail.com
077 1916 6731
@maryamNamazie