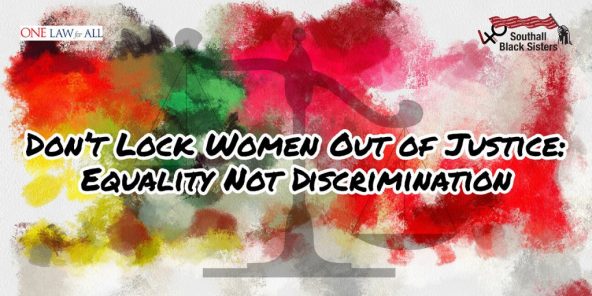 Don’t Lock Women Out of Justice: Equality Not Discrimination

Join the One Law for All campaign at the Court of Appeal on 13/14 November to support the protection of women’s rights on the break-up of their marriages. Southall Black Sisters (SBS) is intervening in an important case with far-reaching implications for women’s rights.

On 31 July 2018, Mr Justice Williams, a family court judge decided Ms Nasreen Akhter was entitled to a decree of nullity of marriage, following the break-up of her 18 year old marriage. She had had a nikkah ceremony resulting in a Muslim marriage contract between herself and her husband, Mr Mohammed Khan. The couple were widely recognised as married in Britain and the UAE (where they lived from 2005 to 2011) for tax and other purposes. Although Ms Akhter wanted a civil marriage and believed one would take place, it never happened because Ms Akhter’s husband refused to have a civil marriage.  The marriage ended following her husband’s suggestion that he take another wife. When the marriage broke down, he claimed that they had never been married and that he owed his wife nothing because their relationship constituted a ‘non-marriage’.

In court, the judge determined that ‘save for the issue of legal validity, this was a marriage and a long one at that’. He concluded that in the interests of human rights and justice, the marriage should be recognised as ‘void’ and granted a decree of nullity which allows Ms Akhter to claim the financial remedies that allow the family court to achieve a fair distribution of their family finances .

Ms Akhter and her husband are no longer taking an active part in the appeal but we are intervening to support the decision of Mr Justice Williams.

We regard Mr Justice William’s judgment to be just and humane. It will assist many women who believe that they are validly married to access justice through the family courts. If the appeal succeeds, the law will continue to trap minority women, particularly Muslims, in a legal limbo when they are coerced or deceived into having only a religious marriage contract rather than a valid civil marriage which is recognised in law. It will encourage women to access sharia and other religious ‘courts’ to resolve marital issues.

It is extraordinary  that the government is pushing for this  discriminatory  conclusion since it will entrench even more the power of sharia ‘courts’ to arbitrate over family matters in accordance with fundamentalist and ultra-conservative norms.

Extensive research conducted by One Law for All, including dozens of interviews with women who have experienced the horrors of ‘sharia law’ in Britain, shows how women are traumatised and humiliated in a system weighted against them. The result is that polygamous marriages are increasing and men are walking away from any responsibility at the end of a marriage. The government has failed to act against sharia ‘courts’ and has ended legal aid for family matters. Now it seeks to deprive minority women of their rights in the civil justice system.

We argue that if the appeal is allowed, the law will be discriminatory. Christian women in a similar situation would be able to have their marriages declared ‘void’, and thus have access to financial remedies from the courts, but women who have married in another religious system, may not. This is not about recognising religious marriages; it is about the state guaranteeing equality to all before the law.

We say EQUALITY NOT DISCRIMINATION.

We need your support to make equality a reality for minority women.

Join our protest outside the Court of Appeal on 13th and 14th November at 9.30am.

Gita Sahgal and Maryam Namazie, One Law for All:  www.onelawforall.org.uk