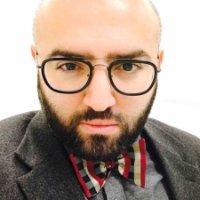 Tuesday 4 April 2017, 6:30pm-8:30pm, central London by Kings Cross
Evening with Wissam Charafeddine, Co-Founder, Muslimish Support Network on Why the Classical Proof of God Does Not Work Anymore (based on his background on Islamic theology)

PLEASE NOTE: This is a new venue for our monthly meet-ups; if you would like to attend, please email onelawforall@gmail.com to register and receive further information. If you already know the new location, just show up.

Wissam Charafeddine, was born in United Arab Emirates from Lebanese parents. He attended the Islamic Hanbaly Educational Institute and graduated with a diploma in Islamic Shariah. After the first Gulf war, his family immigrated to the U.S. During his academic studies, Wissam continued to study and give lectures on Islamic Shariah through distant-study programs with Hawzah of Ahlulbait in Qum, Iran, and with local scholars. He was the founder of Halakat Imam AlBaqir, an Islamic Studies Institute in Dearborn where he taught, among other teachers, various topics in Islamic studies. He was a co-founder of the Muslim Scouts of Michigan, Islamic Monitor Action Network, Islamic Unity Magazine, and was a member of various organizations, among which were the Council of American Islamic Relations (CAIR), Islamic House of Wisdom, and Amnesty International.

In 2005, he co-founded IRSHAD (the Institute for Religious Studies, Humanities, and Dialogue) to seek free coexistence between human beings and the aspiration for building a better life centered around the well being of humanity. IRSHAD functions in its Islamic branch as a reform movement that calls for freedom of belief and expression, and a less literal interpretation of Quran.

Wissam co-founded Muslimish in 2012, which is an organization that seeks to create an environment for support and dialogue among ex-Muslims and questioning Muslims, and fight for the freedom of expression and against blasphemy laws in countries under Islamic rules.