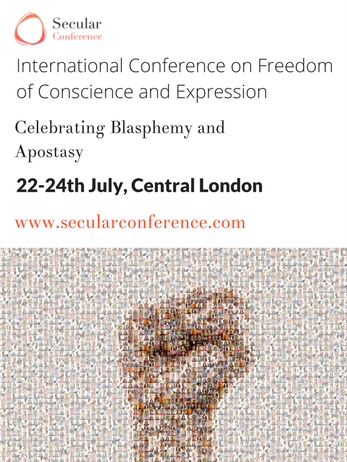 22-24 July 2017: International Conference on Freedom of Conscience and Expression in the 21st Century

International Conference on Freedom of Conscience and Expression in the 21st Century
Saturday and Sunday 22-24 July 2017
Central London, UK

READ INTERVIEW DISCUSSING THE IMPORTANCE OF THE CONFERENCE AT A TIME WHEN ATHEISTS AND SECULARISTS UNDER INCREASING ATTACK.

Join over 70 notable free-thinkers from around the world for a weekend of discussions and debates on freedom of conscience and expression in the 21st century at a spectacular venue in central London during 22-23 July 2017.

On 24 July, an activist strategy meeting will be followed by body-painting in support of ex-Muslims, which will be open to the public.

The two-day conference will discuss censorship and blasphemy laws, freedom of and from religion, apostasy, the limits of religion’s role in society, LGBT and women’s rights, atheism, secular values and more.

The conference will highlight the voices of people on the frontlines of resistance – many of them persecuted and exiled – as well as address challenges faced by activists and freethinkers, elaborate on the links between democratic politics and free expression and conscience, promote secular and rights-based alternatives, and establish priorities for collective action.

Art and culture will be integral to the event as will lively debate with the dauntless use of the free word.

READ MORE ABOUT OUR DISTINGUISHED SPEAKERS.

All tickets must be purchased beforehand. No tickets will be sold at the door.

Organisations/vendors can book stalls for the two-day conference for a flat rate of £500.

The conference is sponsored by: Alliance of Liberals and Democrats for Europe; Atheist International Alliance; Bread and Roses TV; Center for Inquiry; Centre for Secular Space; Council of Ex-Muslims of Britain; Culture Project; Euromind; Equal Rights Now; Fitnah; Freedom from Religion Foundation; National Secular Society; One Law for All; Richard Dawkins Foundation for Reason and Science; Southall Black Sisters; Secularism is a Women’s Issue, amongst others.