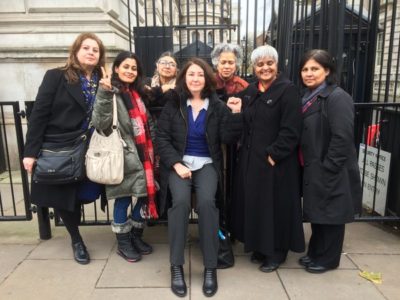 On Thursday 10 December 2015, Southall Black Sisters (SBS), One Law for All, Iranian and Kurdish Women’s Rights Organisation (IKWRO), Centre for Secular Space and British Muslims for Secular Democracy attended 10 Downing Street to hand deliver a letter signed by nearly 400 individuals and organisations urging David Cameron to hold an inquiry into the discriminatory nature of Sharia ‘courts’ and other religious arbitration forums.

These women’s and human rights organisations also led successful campaigns preventing public authorities such as the governing body of UK Universities (UUK) and the Law Society from incorporating aspects of Sharia laws into their public policies. With regards the question of parallel legal systems, they argue that in these times of draconian austerity measures and cuts to legal aid, these unaccountable, arbitrary and religious ‘courts’ presided over by fundamentalist religious forces are increasingly filling the vacuum that is created. They dispense a second rate system of justice that denies vulnerable women and children access to equality and human rights.

Campaigners are calling on the government to exclude Sharia and all other religious forums, including the Jewish Beth Din from presiding over divorce and family matters; to reinstate legal aid; to stop the repeal of the Human Rights Act and to re-affirm the principle of the separation of religion and the law. The law is a key component of securing justice for citizens and one law for all.

“Discriminatory religious codes are very much a part and parcel of the continuum of domestic and gender based violence and other abuses that BME women face in their daily lives since they reinforce discrimination, deny exit and prevent women from accessing justice or from asserting their right to equality…For these reasons and more, parallel legal systems must not be allowed to exist.”

Maryam Namazie of One Law for All says:

“Sharia Councils drag women into living out a fundamentalist vision of Islam. They do this by promoting ‘Islamic law’ as higher than the law of the land and by marketing divorce as a solution for a problem they have created. It is a disgrace that they are tolerated by the authorities and allowed to become charities. All parallel legal systems are discriminatory and undermine women’s rights under the law. It is time that they are dealt with.”

“The whole premise of religious ‘courts’ is discrimination to women, they represent a major barrier to women’s rights and not only do they deny women justice, they also distance women from the mainstream court system and safety measures, such as civil protection orders, which can have dire consequences. Given that religious ‘courts’ are community based and often mediate, there are dangerous implications including locking women within violent marriages and “honour” based violence. The government must prioritise women’s safety by ensuring access to mainstream justice and preventing the proliferation and deepening entrenchment of these parallel legal systems.”

“Government, Parliament and the courts have a duty to protect the rights and prevent the exploitation of the most vulnerable members of society.    But all too often we find they abrogate this responsibility by condoning parallel systems of justice that promote cruel and discriminatory practices perpetuated by obscurantists and fanatics in many faith communities – often, falsely pleading divine sanction as a smokescreen for cruelty.  The only way to ensure equality and justice is to stand together for clarity and  ‘one law for all.’  This does not mean that we do not accept religious, cultural and ethnic diversity; rather we raise our voices against injustices perpetuated in the guise of faith and culture.”

Maryam Namazie
One Law for All
maryamnamazie@gmail.com
077 1916 6731
@MaryamNamazie