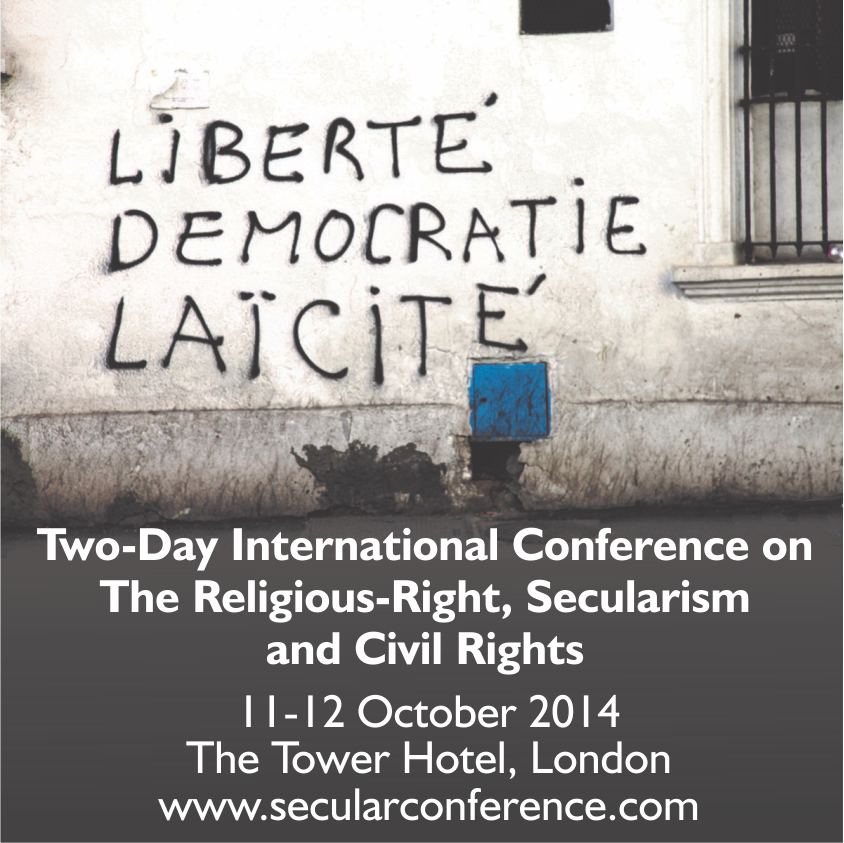 “Secularism is probably the one big issue for our century. This century is not, as many still think, marked by a religious or spiritual revival. What we are actually witnessing is the rise of extreme-Right political movements, working under the cover of religion. Everywhere. No one is spared… Secularists are being attacked in many places in the world today: they are jailed, killed, tortured; their very existence is considered an offense to believers in many non-secular states. … There is a need for secularists around the world to come together and examine their situations, to exchange information, to strategize and to join hands,” writes Algerian secularist Marieme Helie Lucas.

This is the impetus behind the 11-12 October 2014 International Conference on the Religious Right, Secularism and Civil Rights in London with speakers from countries or the Diaspora as diverse as Algeria, Bangladesh, Canada, Egypt, France, India, Iran, Iraq, Israel, Libya, Morocco, Pakistan, Palestine, Poland, Senegal, Sudan, Switzerland, Syria, Tunisia, UK, USA and Yemen.

Join this historic conference which will establish an international front of secularists against the religious-Right.

Register for the conference today.

See the biographies of our distinguished speakers here.

See a short Bread and Roses Video on the conference here.

The conference is endorsed by Atheist Alliance International; Bread and Roses TV; Children First Now; Center for Inquiry; Council of Ex-Muslims of Britain; Equal Rights Now – Organisation against Women’s Discrimination in Iran; Fitnah – Movement for Women’s Liberation; International Committee against Stoning; International Committee against Execution; International Federation of Iranian Refugees; Iran Solidarity; National Secular Society; One Law for All; Secularism is a Women’s Issue; The Richard Dawkins Foundation for Reason and Science UK; and Women Living Under Muslim Laws amongst others.

Richard Dawkins will be attending the conference.